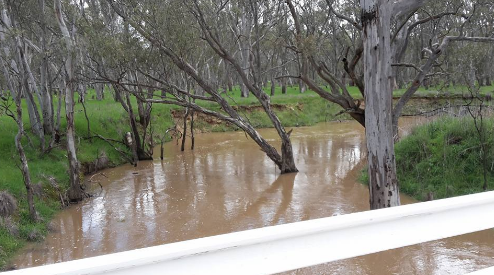 Parts of Victoria already suffering from recent heavy rains will be subjected to more downpours and possible flooding, bringing mixed fortunes for the state’s farmers.

The Bureau of Meteorology said western Victoria would see falls between 20mm and 40mm of rain, but some areas would receive up to 70mm.

A severe weather warning has been issued for heavy rain in the Mallee and parts of the Central, South West, Northern Country, North Central and Wimmera regions, including Mildura, Horsham, Ballarat and Bendigo.

“There are places that have had some pretty heavy rainfall over the last few weeks,” senior forecaster Keris Arndt said.

“And there’s been some significant stream rises. Everything’s pretty saturated so it’s not going to take much for floodwaters to start rising again.

“There’s plenty of flood watches and flood warnings out for most of the catchments in western and northern parts of Victoria, so if you’re susceptible to floodwaters where you are make sure you’re aware of what’s going on and have contact with your local SES.”

Victorian Farmers Federation vice-president Brett Hosking said the rain was proving to be a blessing and a curse for those on the land.

“Depending on where you are in the state it’s either welcome or making growers very nervous,” he said.

“The north-west of the state is absolutely loving it. This is a season-making rain.

“[But] there are some areas, particularly in the north-east, who are a little wet already and a bit nervous about what the impact might be.”

Mr Hosking said for the most part, the rain was welcome.

“They’re … in that spring time which is the time when good rain really capitalises on everything that’s happened in the season and it’s probably ideal timing for us.”

Send us your weather pictures at mailto:social@thenewdaily.com.au

Flood fears in Victoria with more downpours on the way