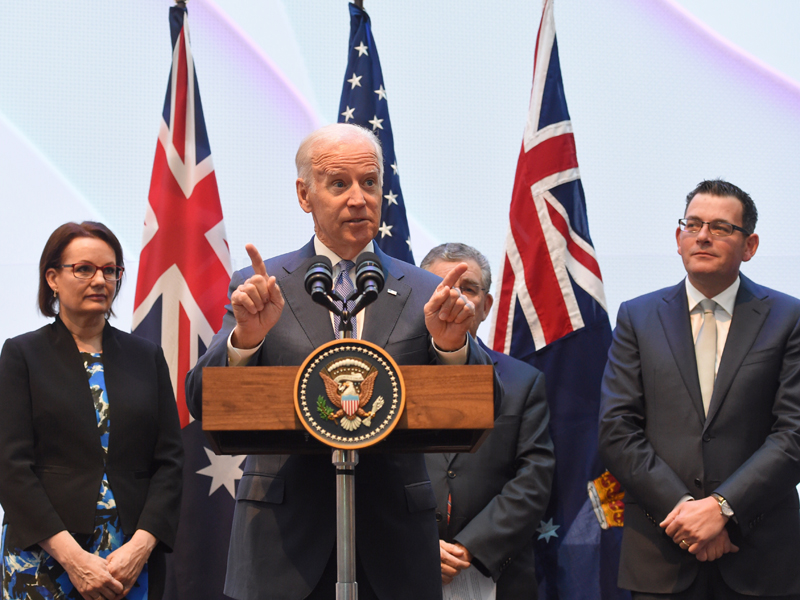 US Vice President Joe Biden has thanked Australian researchers for their contribution to the global fight against cancer, calling their efforts “profound” as he toured Melbourne’s $1 billion cancer centre.

Mr Biden has met with researchers at the Victorian Comprehensive Cancer Centre in Parkville on the first leg of his visit to Australia.

He said it was “truly an honour” to visit the centre, which he said would be an important contributor the global efforts to find a cure for cancer.

“What you do here is profound, it has an impact on every corner of the world,” he told researchers and dignitaries at the state-of-the-art facility.

“What you’re doing here adds somewhat exponentially to the prospect of us being able to do in the next five years what would otherwise take five to 10 years.

“We’re on the cusp of so many potential breakthroughs.”

The Vice President is the chairman of the National Cancer Moonshot Initiative, which aims to accelerate cancer research in the United States.

The issue is one close to his heart after losing his 46-year-old son Beau to brain cancer last year.

He said it had taught him the importance of time for those touched by the disease.

“You learn that a day makes a difference. You learn that people who know they have no chance are just saying to their clinicians, ‘Can you just give me one more month so I can give my daughter away at her wedding?’,” he said.

Biden gets at taste of footy at the MCG

Later, he met with war veterans and attended a flag presentation at the MCG, before settling in to watch the match between Carlton and West Coast.

The lifts to the Olympic Stand were reportedly locked down upon his arrival to watch the game, as the secret service did a full security sweep of the box.

Foreign Minister Julie Bishop, a keen Eagles supporter, was also at the game.

He made his way onto the oval and was given a Carlton jumper by injured skipper Marc Murphy, perhaps fittingly given Ms Bishop once gave President Barack Obama an Eagles jumper.

Mr Biden will have dinner with Victorian Governor Linda Dessau.

On Monday he will tour the Boeing factory in Melbourne before flying to Sydney, where he is expected to meet with Prime Minister Malcolm Turnbull.

He flew to the city on Saturday night amid tight security, and was welcomed by Victorian Premier Daniel Andrews before being whisked away to a city hotel.

The new cancer centre combines Victoria’s leading cancer research, education and training facilities and is said to be one of the best in the world.