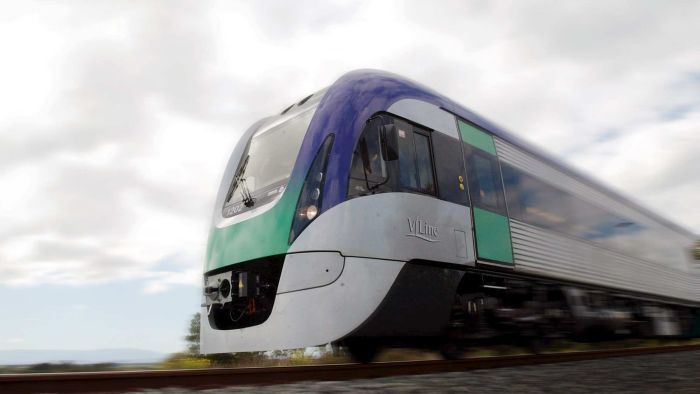 A passenger train and a car have collided at a level crossing in country Victoria.

A level crossing upgrade should be fast-tracked following the collision between a semi-trailer and a V/Line commuter train near Colac, in the state’s south-west, a local MP says.

Investigations are continuing into the collision between the Warrnambool-bound commuter train carrying 100 passengers at a level crossing at Pirron Yallock, just outside Colac, on Wednesday afternoon.

The 41-year-old truck driver from Ballarat has been flown to hospital with serious injuries, but his condition is now listed as stable.

Eighteen others are in a stable condition with minor injuries.

Polwarth MP Richard Riordan said level crossing upgrades at the site, including flashing lights, bells and boom gates, should be fast-tracked because the work is not slated to begin until April 2017.

“This crossing is on a gravel road, it’s a fairly busy bit of road with some large farms on it,” he said.

“The main concerns is that it’s on a stretch out of Colac, it’s unmanned, there’s no lighting, there’s no boom gate, there’s no active warning signal.”

Colin Tyrus, from V/Line, said the crash happened at an “unprotected level crossing” which had signs.

“It’s on a minor road and these are the sorts of crossings that V/Line is gradually working through to try to remove as many as we can.”

The train’s driver and conductor were being treated at Colac and Geelong hospitals respectively for head wounds.

The conductor was booked in for X-rays Wednesday evening, and was said to be in “good spirits”, according to V/Line spokesman Colin Tyrus.

Passenger Julia Thompson told the Warrnambool Standard she was sleeping in her carriage at the back of the train when she was flung off her seat and a suitcase hit her face.

“It felt like an earthquake. Everything was shaking and rocking,” Ms Thompson told the Standard on Wednesday.

“Then there was silence. Everyone was stunned.”

She also said the truck driver had been thrown through his front windscreen and was lying on the ground next to the train.

Sergeant Shane Howard was amazed everyone had come out alive from the collision.

“One hundred people on the train and the truck driver needs to be buying a Tattslotto ticket this week,” Sgt Shane Howard told Nine News.

The level crossing is categorised as a “passive crossing”, with no boom gates or flashing lights.

Victoria Police said a number of carriages derailed from the passenger train, and the cause of the incident is being investigated.

Police will remain at the scene late into the evening as crews gather evidence.

Track engineers are also at the scene assessing what equipment will be required to commence the recovery operation once investigators give the all clear.

The train involved was the 1.21pm Southern Cross Station to Warrnambool service, and all services on the Warrnambool line have been suspended until further notice.

Coaches were brought in to take passengers home, and a V/Line spokesman said the investigation into what happened would begin at first light.