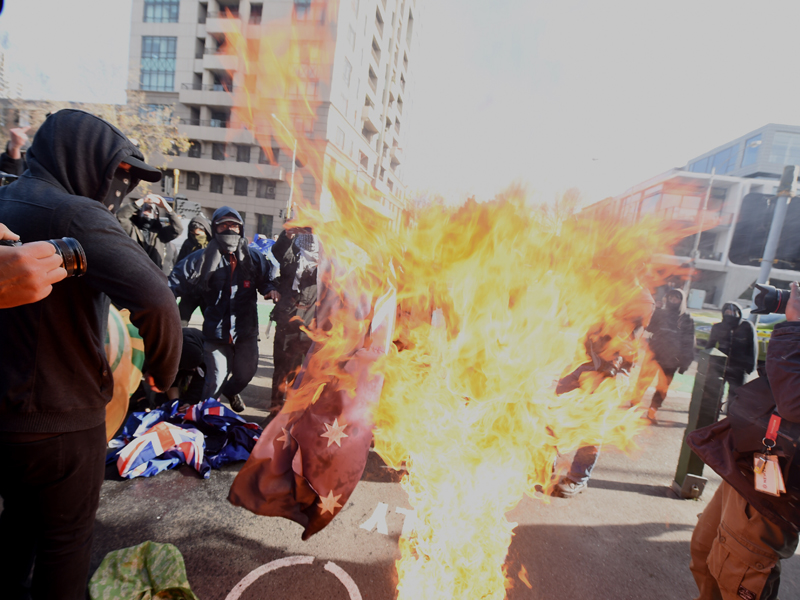 Scuffles have broken out and media representatives have been attacked at a Melbourne rally despite two opposing racism groups being kept apart.

A flag has been set alight and at least one photographer was assaulted at the True Blue Crew event that marched to Royal Exhibition Building in Carlton to show support for the nation and the flag.

An opposing Campaign Against Racism and Fascism group has been kept separate by a heavy police presence and marched from Parliament House through the central business district.

More than 400 police were on patrol to try to quell the opposing rallies.

True Blue Crew declared earlier this month it would rally to “display our pride in our flag and country”.

That prompted a retaliation protest by opposing group Campaign Against Racism and Fascism.

Groups for and against Islam clashed violently at a Coburg rally in late May and Police Minister Lisa Neville had asked families to avoid Sunday’s protest outside parliament.

“Both parties deliberately set out to cause tension, perpetrate hate and perpetrate violence – no one has that right,” Ms Neville told reporters last week.

Today’s rally coincides with a report that tough new laws are set to be introduced in Victoria to “stop public protests becoming battlegrounds”.

News.com reports that new powers to tackle violent protesters, including new public disorder, affray and violent disorder offences, will be put to parliament by the ­Andrews Government before the end of the year.

Protesters who shield their identities by wearing masks will also be targeted in the crackdown.

Those charged with affray could be imprisoned for up to five years.