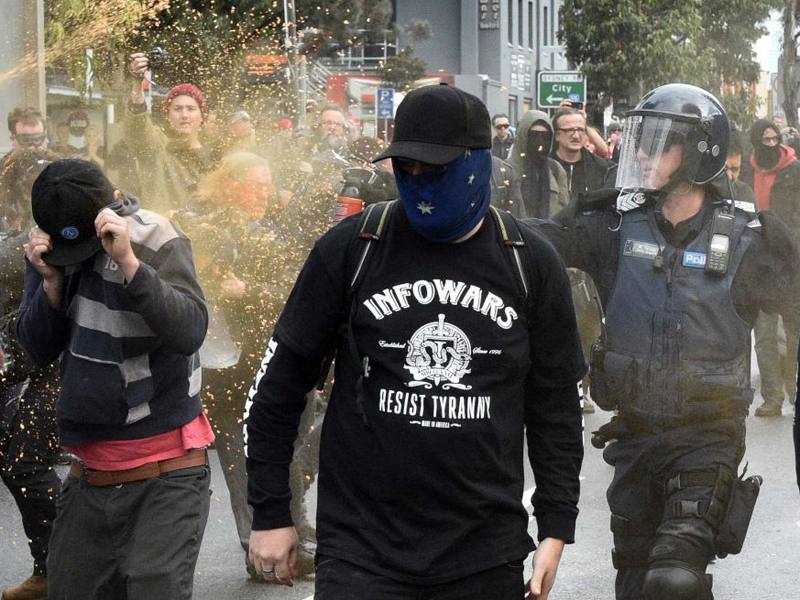 Protesters have been hit with Australian flag poles and drenched in pepper spray in ugly clashes between rival groups at a rally in Melbourne.

Heavy rain didn’t deter the groups in Coburg on Saturday as they rallied against both Islam and racism at Bridges Reserve.

• ALP kingmaker’s shaky future
• George Negus: Why our obsession with leadership has to stop
• Finally, some good news to replace the budget lies

More than 500 people, some draped in the Australian flag and most with their faces covered, had to be separated by riot police on Bell Street in Coburg.

More than 50 police, including the mounted branch, separated the rival groups numerous times during the rally that began about 11am.

But they failed to keep some protesters apart, and officers used capsicum foam as scuffles broke out between the rival groups.

They hurled abuse at each other, with anti-racism protesters chanting “Nazi scum, off our streets”.

Seven arrests have been made.

Those taking part in the anti-racism rally gathered at the Coburg Library and planned to march towards Bridges Reserve.

Anti-Islam groups and the United Patriots Front held a counter rally nearby, with many being bussed into the area.

Those behind the march said they had the right to peacefully protest and were committed to organising a safe rally.

Sydney Road was closed between Munro and Bell Streets.

Police on Thursday warned people have a right to protest, but any show of violence would not be tolerated.

The library and nearby Coburg Leisure Centre was closed as a precaution, and the Victorian Government urged people, particularly families, to avoid the area.

In February, hundreds of police separated rival groups rallying in the central Victorian city of Bendigo demonstrating for and against the construction of a local mosque.