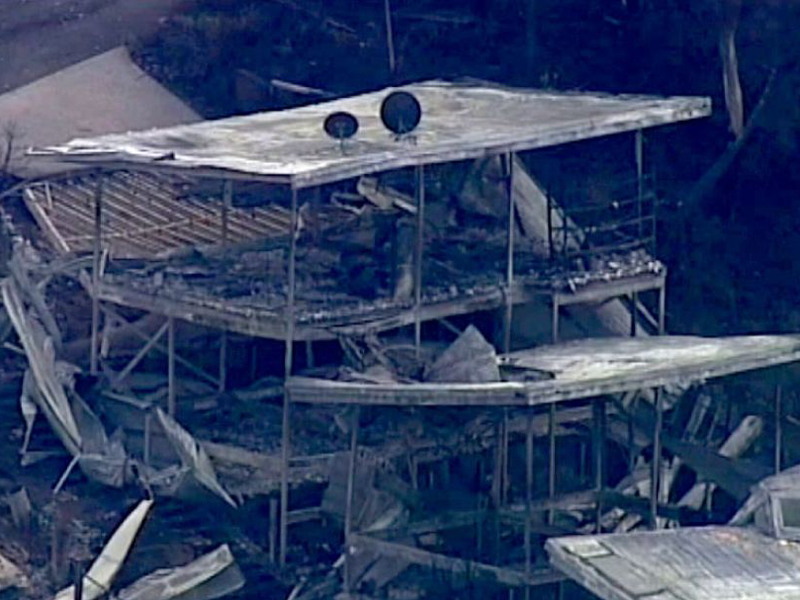 More than 100 homes have been lost in an out-of-control fire still burning on Victoria’s surf coast.

Firefighters have conducted an extensive search of Wye River and Separation Creek on Saturday, where all of the homes were lost.

“That will probably be the final number, as we’ve just completed an extensive search,” Mr Gunning told AAP on Saturday.

However, the fire stopped just 500 metres short of Kennett River.

Residents and holidaymakers were told it was safe to return to Lorne shortly after 9am on Saturday after spending most of Friday evening evacuating the area.

Although the CFA has downgraded the fire warning to a watch and act in Lorne, Mr Gunning said the fire was still out-of-control and people needed to remain vigilant.

Emergency Management Commissioner Craig Lapsley said the blaze was intense though not large, and had been pushed along by strong winds.

It could continue burning until January or February because a dousing of rain on Saturday was unlikely to do much in the long term once the state began to dry out.

Victorian Premier Daniel Andrews said people “did a very wise thing” in obeying an evacuation orders on Friday as fire destroyed homes along Victoria’s surf coast but did not claim any lives.

Late on Friday night, residents of Lorne, Allenvale, North Lorne and Cumberland River waited anxiously to learn if their homes would survive.

Authorities held fears that a cool change could redirect flames towards Lorne, a major tourist town on the Great Ocean Road, but by midday on Saturday the threat to Lorne had been downgraded.

“It’s only through people making smart choices, the work of Victoria Police, the work of our emergency services fighting the fire, and all of our other partners that we have had no injuries, no loss of life,” Premier Andrews said.

“This is really a very challenging fire but one — in the planning and the execution, and indeed in terms of the outcomes — where no person has been harmed. That’s something that we can be very proud of.”

The emergency situation around Lorne has eased. Emergency Management Commissioner Craig Lapsley said crews were in Wye River checking the extent of damage and were expected to update the numbers of homes destroyed.

Mr Lapsley said the fire plan put in place in the days leading up to Christmas helped to save lives.

“It was actioned just before lunchtime on Christmas Day, where the community were told to evacuate, and they did that in a very orderly way,” he said.

“They did it in a way that led the community with a lot of confidence, a great community in Wye River, and Separation Creek, to do what they have done.

“That’s one of the success factors. That is, they walked away from the fire that had every potential to be a killer, be a killer in every aspect with the intensity levels of that fire.”

Mr Andrews said everything would be done to support the community and local businesses who may experience some losses over the peak tourist period.

Despite the arrival of the cool change, which brought rain, fire authorities said early on Saturday that the fire remained “pretty significant in size”. About 300 firefighters, 60 tankers and 18 aircraft have been involved in the operation.

Mr Lapsley said: “There has been rain across most parts of Victoria. On the fire though it’s been as low as 5mm and in other places up to 20mm. It’s helping us but it won’t put the fire out.” State response controller Peter Rau said: “It’s been very traumatic for a number of people. To lose a property at any time is traumatic, but on Christmas Day is something these people will remember forever, unfortunately. Our hearts go out to those who have lost properties.

“There could be more, but we need to wait [for] our rapid impact teams to evaluate the area. We won’t know of any further losses until we get in and have a good look around.”

At 11.30pm, the fire front was about 10 kilometres from Lorne with fears among residents the fire could turn on the town. Many were sheltering at the beach or in open spaces at the town centre.

“We’ve still got Christmas presents sitting under the tree — we’re hoping they’re still there when we get back,” Patrick Hilditch, who left his Kennett River holiday home with his family, told the Herald Sun.

“It’s scary not knowing if your house is burning.”

The Victorian government is offering grants of $1300 to people who have had to evacuate homes.

What we know so far

• Four towns evacuated: Separation Creek, Wye River, Kennett River, Grey River
• Town of Lorne was advised to evacuate, but people were told they could go back about 9am on Saturday
• 116 houses lost in Separation Creek (18) and Wye River (98)
• Total of 334 homes in those areas, 80 primary residences, the rest holiday homes
• Residents are sheltering in Apollo Bay Leisure Centre or Torquay Relief Centre, and in Geelong
• About 2200 hectares burnt through
• Blaze stopped just 500m short of Kennett River
• Rain soaked the fire area overnight
• 500 firefighters, 29 tankers and 13 aircraft battling the blaze
• Fire triggered by lightning in an area of tough terrain that hadn’t been burnt in decades
• Jamieson Track fire expected to burn for couple of months
• No injuries or fatalities reported
• Affected people offered relief grants up to $1300 per household, grants up to $32,000 for repairs to primary residences
• Road to Lorne open, closed to the south
• Also significant Wye River fires in 1939 and 1962, when fire moved into the town The area along the state’s surf coast is a very popular spot with holidaymakers during the Christmas and New Year period.

A steady trail of cars was seen entering Apollo Bay as people in the area moved from the fire’s path, with many mingling at the local beach.

The ABC’s Sarah Jaensch was at Separation Creek and said people were taking heed of the CFA’s warnings.

“As we drove through Wye River the caravan parks were packing up, everyone is leaving and getting out of there fortunately, and taking it seriously,” she said.

Many people who have evacuated from their homes gathered at the Apollo Bay Leisure Centre.

Volunteer Patrick Carey said it was a normal Christmas Day for many until the smoke loomed large on the horizon.

“They were all prepared to put their barbecues on, they were cooking away, and all of sudden they could see the smoke coming over the hill, they thought it was still four hours away according to what they’d heard,” he said.

“Then all of a sudden, it was an hour away and then it was half an hour away. So they just dropped everything, stopped cooking and headed here.”