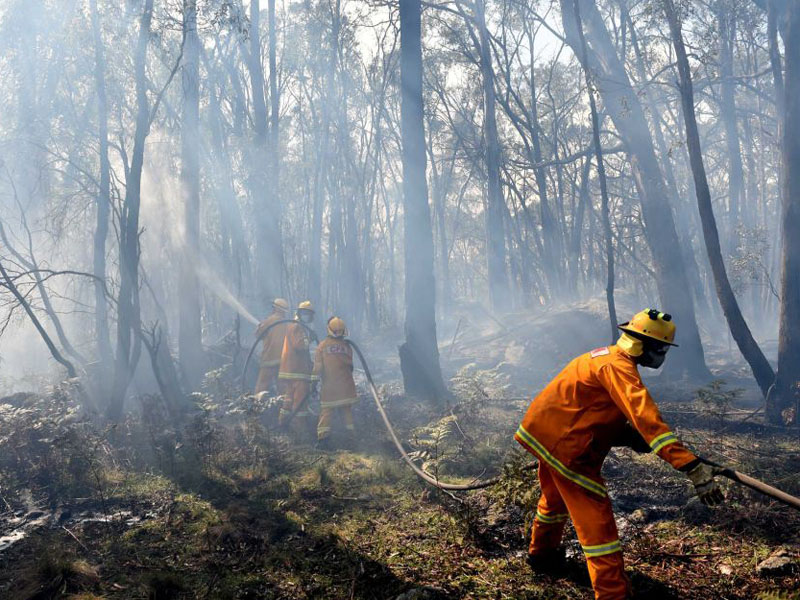 A second home has been destroyed by an out-of-control bushfire burning near Lancefield, in central Victoria, as strong winds cause difficult conditions for crews fighting the blaze.

The blaze is now more than 4000 hectares in size with 300 firefighters, 50 tankers and a number of aircraft and bulldozers working to protect properties.

Authorities confirmed the fire had destroyed two properties and warned that number could rise, but the CFA said it was confident the fire would not spread much further.

Emergency Management Commissioner Craig Lapsley said the state was facing one of its driest periods on record and it was “time to take action” and prepare.

“We’ve now moved into fire season. The last three or four days has seen us have extreme temperatures, excessive winds that have dried out the landscape,” he said.

“We will see more fires in the landscape in October than we’ve probably ever experienced in Victorian history.”

Two CFA vehicles have been damaged by falling trees in the past 24 hours and the CFA said crews were lucky to escape uninjured.

The fire was started as part of a planned burn-off last week but became out of control over the weekend, prompting anger from locals questioning the decision.

A watch and act is also in place for Baynton East, Pastoria and Sidonia.

It is travelling in a north-north-westerly direction from Burke and Wills Track and Kitchenhams Road.

The CFA said it was too late to leave and people in the area should shelter indoors.

It also said there had been ember attacks on homes in sections of the fire ground and spotting ahead of the main fire.

There are a number of road closures in the area due to hazards, including falling trees and poor visibility due to smoke.

Crews are also battling a fire in the Tallarook Ranges, and watch and act messages have been issued for Kerrisdale, Granite and Trawool.

The fire is heading in the direction of King Parrot Creek Road due to unpredictable weather conditions and difficult terrain, the CFA said.

Bureau of Meteorology duty forecaster Peter Newham said the fairly fresh south to south-easterly winds causing problems on the fire ground would be around for some hours yet.

“Gradually by sunrise tomorrow [Thursday] there will be much lighter winds and still not hot,” he said.

“Hopefully there’ll be a couple of better days to get the fire under control.”