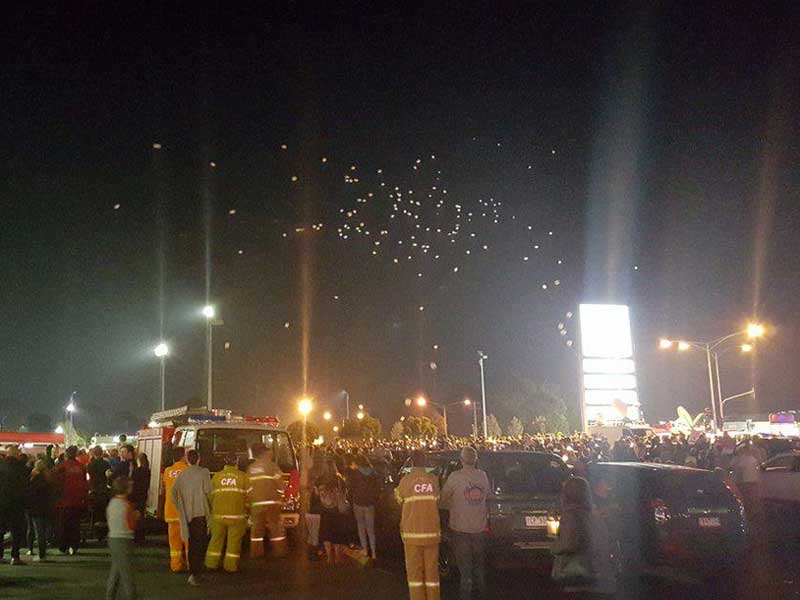 Thousands of mourners attended a funeral for Melbourne mother Andrea Lehane, who died after she was mowed down outside a Melbourne shopping centre.

Candles and white balloons were held high as more than 2000 people gathered in the Carrum Downs shopping centre car park on Sunday.

Andrea Lehane, 33, was fatally injured when she was allegedly hit by a mini-motorbike as she crossed the road to the car park on Wednesday.

Family members turned off the mother-of-two’s life support on Friday and donated her organs after she suffered “unsurvivable” brain damage from the crash.

Her husband, James Lehane, supported by family and friends, told the crowd how caring and nurturing his wife had been, the Herald Sun reported.

“As they grow up they’ll have a small but beautiful memory of their mother, and I need to step up and be double the father I was, that is something I promised them I will do.”

The Melbourne mother-of-two died on Friday afternoon and her organs were donated.

Three teenage boys were arrested on Friday after raids at three homes.

Caleb Jakobsson, 18, faced court over the hit-run death on Saturday and was remanded in custody to appear on Tuesday.

He was bailed to appear at a Children’s Court at a later date.

Mr Lehane described his wife as extraordinary and “very content in her life”.

“She’ll always he remembered and missed – words cannot start to explain how I feel,” he said.

“Being a nurse, Andy was always keen on organ donation, so as a family we have consented to her going through a complete organ donation process.”

Mr Lehane asked for privacy and time to grieve.

Premier Daniel Andrews said Victoria’s thoughts and prayers were with the Lehane family.

“My commitment to their family and to all Victorians is we will learn from this and if there is a need for us to change policy, to tighten up or change the way in which we enforce the law, we will look at that,” Mr Andrews said.