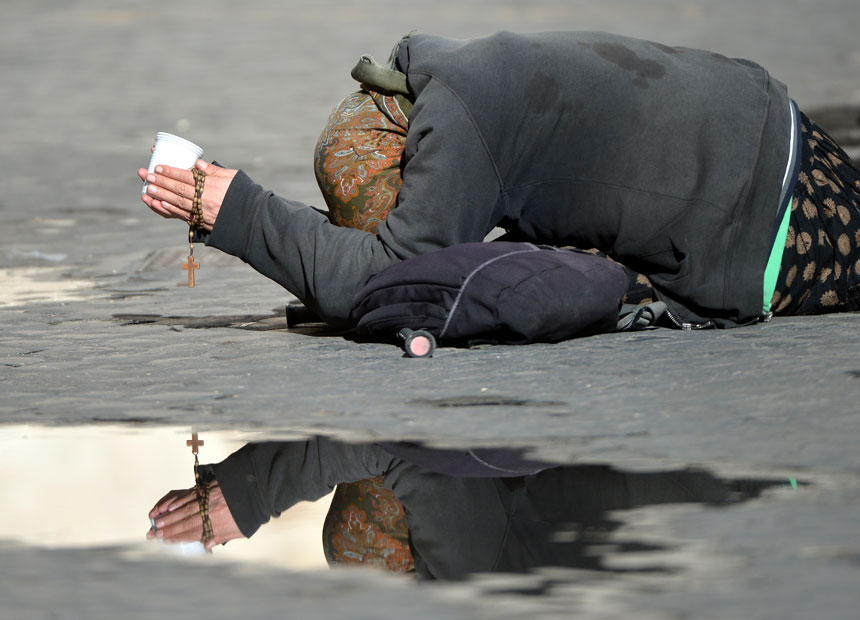 A small number of “professional beggars” are earning up to $400 a day and intimidating women and international tourists in Melbourne’s CBD, according to a report.

The study also found some are loosely organised and not homeless.

The report was produced by a Salvation Army support service Melbourne Project 614 earlier this year.

They interviewed 135 beggars and while the majority were found to be in genuine need, nine were revealed as professional beggars.

“We had one person indicate to us that he was raising in the vicinity of $300 to $400 a day or an evening and he was doing that on a regular basis,” Major Brendan Nottle from the Salvation Army said.

“That was about six days a week, and so he saw that as a very profitable way of earning income.”

Major Nottle said that particular individual had permanent accommodation and other forms of income besides begging.

“He said to the worker that was working with him that he was involved with drugs, so the money was going towards supporting his habit,” Major Nottle said.

Major Nottle said some professional beggars were targeting women and international tourists, and a handful were seen hurting people who would not give them money.

“We saw one person spat upon, we saw another person pulled to the ground when they refused to give money to the beggar,” he said.

Major Nottle said the professional beggars were financially secure enough not to need help with food or shelter.

“They indicated to us that they were not interested in any way in the services that we were offering,” he said.

The Salvation Army believes the physical violence of some beggars could be criminal and police should get involved.

“In the past they’ve run a series of operations,” Major Nottle said.

“There was an operation run last year called Operation Minto and they targeted this particular group, and in that operation they actually connected with some of those people that we’ve referred to as professional beggars and they were charged.”

Major Nottle said that while mental health outreach services are doing an excellent job, their capacity is stretched.

“What we’d like to see is a government response where there’s additional services provided to deal with those people that are on the streets suffering from very serious mental health issues,” he said.

The Victorian Council of Social Services’ Emma King has urged people not to jump to conclusions.

“We want to be very cautionary here about not demonising what are our most vulnerable people,” she said.

“We know that the vast majority of people who are begging in our CBD are there because they’ve actually got nowhere else to go.

“It does highlight the fact that actually we’ve got a significant issue when it comes to affordable housing for people having somewhere safe to do.”

Professional beggars earn up to $400 a day in Melbourne CBD