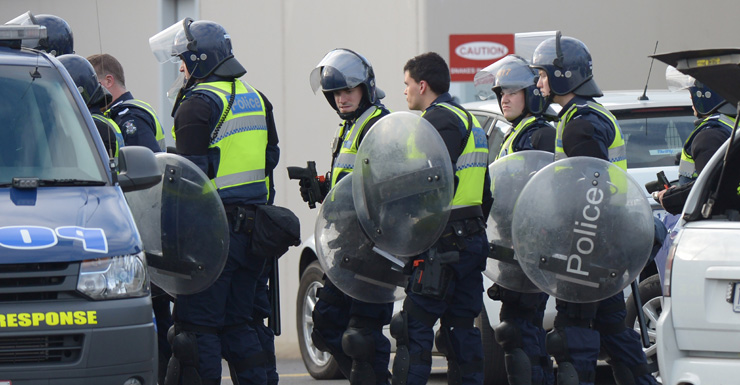 Corrections Victoria confirmed two staff members and several inmates were injured as a result of the protest at Melbourne’s Metropolitan Remand Centre in Ravenhall, in defiance of state-wide smoking bans to be introduced to prisons on Wednesday.

They said about 400 staff were evacuated from the prison after inmates brandishing sticks, bats and lighting fires made their way into a secured inner perimeter of the facility.

There were reports late Wednesday morning that a fire had reignited at the Ravenhall remand centre, just hours after officials addressed the incident at an official press conference.

Corrections commissioner Jan Shuard said earlier at the press conference the smoking ban may have sparked the riot at the Metropolitan Remand Centre, but that the exact cause was still being investigated.

Victoria Police Assistant Commissioner Stephen Leane told reporters those responsible for the riots would be punished.

“We’ll continue to do those investigations and hold those who caused the damage, and started the riot and maybe assaulted other people, accountable,” he said.

Victorian Police Minster Wade Noonan said the incident “will not be tolerated”.

“I want to assure the Victorian people there will be a thorough investigation into what caused this riot and how this major security breach happened and how we responded to it,” Mr Noonan said.

“We will get to the bottom of this, we have learnt lessons from this incident and we will be putting proper measures to endure something like this doesn’t happen again.

“I am deeply relieved that no one was seriously hurt.”

Prison officials had been preparing for 18 months to prepare for the introduction of the smoking ban, Ms Shuard said.

About 84 per cent of people going into the state’s 14 prisons smoke and about 1,300 prisoners, or 20 per cent of the prison population, have attended quit programs up until the end of May.

The facility was in lock-down on Tuesday as emergency crews were on scene in an attempt to control the prisoners.

There were unconfirmed reports that members of rival bikie gangs had pulled down the fence that separated them and were fighting.

Heavily-armed riot squad officers packed up and left about 3am on Wednesday.

Corrections Victoria said a large number of inmates had been transferred to other jails.

“It has been brought under control but there’s still a hell of a lot of mess in there,” a radio caller who said she knew the facility’s prison officers told Fairfax Radio early on Wednesday.

Riot police armed with batons and shields, dog squad units and critical incident officers with kevlar body armour, high-powered firearms and tear gas were sent to quell the riot on Tuesday afternoon and into the night.

A police officer was seen being driven away in the back of an ambulance but Victoria Police and Corrections Victoria said they had no information about any police injuries.

Late on Tuesday night, four prisoner transport vans were seen leaving the complex, along with a Victoria Police armoured vehicle.

A fire also broke out at Port Phillip Prison, in nearby Truganina, on Tuesday but Corrections Victoria said it was unclear if it was related to the events at Ravenhall.

The Metropolitan Remand Centre is a 1,000-bed facility, 24km west of Melbourne’s CBD.

Fire trucks and an ambulance remain on stand-by outside the jail.