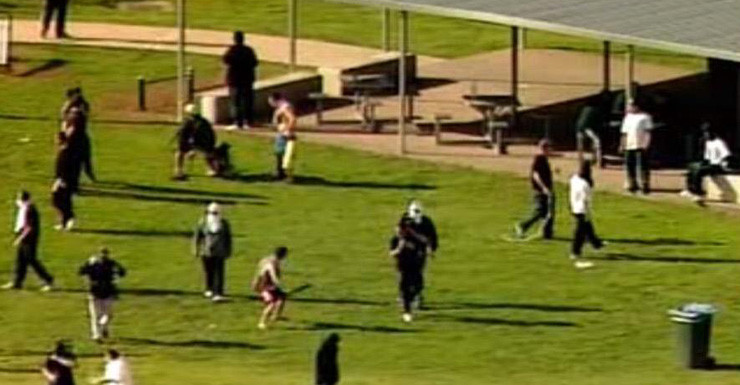 Prisoners entered the control room of the Melbourne’s Metropolitan Remand Centre in Ravenhall amid a riot which was met with an armed response from Victoria Police.

Heavily armed police carrying shields stormed the prison on Tuesday evening after staff were evacuated from the facility.

About 300 prisoners wielding sticks smashed windows and broke doors in protest against a proposed smoking ban due to commence on Wednesday, and reportedly commandeered a tractor and thrown a golf cart on a fire.

The jail was locked down and emergency crews, including eight fire trucks, were on scene in an attempt to control the prisoners, some who are brandishing sticks, bats and their faces hidden by white towels.

Shots were heard coming from the facility just before 6:00pm but it was unclear whether it was tear gas being used or gunfire.

Corrections Commissioner Jan Shuard says the smoking ban may have sparked the riot at the Metropolitan Remand Centre, but the exact cause is being investigated.

“The situation is still being managed,” Ms Shuard told reporters on Tuesday night.

“Until we can have a full debrief on it, we won’t know how this got to this stage.”

At a separate Victorian prison in nearby Truganina a fire was seen from the Seven News helicopter.

A Corrections spokesman told The New Daily the fire has since been extinguished.

There were unconfirmed reports that members of rival bikie gangs had pulled down the fence that separated them and were fighting.

Ms Shuard was unable to confirm how many inmates were involved, or if rival gangs were fighting each other, but said there were no reports of injuries to prisoners or staff.

“We’ve got a large proportion of the prison locked down now but we still have too many out and until we have them all under control, the numbers are hard to determine.”

Police said that 300 prisoners were involved in a demonstration inside the maximum security prison, that started at about 12.30pm.

They said all of the inmates were contained within the grounds.

“Some prisons are quite tense at any time, and I would describe the remand centre as one of those because of the nature of the prisoners that are in there,” she told AAP.

“The experience in some other jurisdictions that have introduced this smoking ban has been that there has been some violence,” she said.

David, a former prisoner at the remand centre, said inmates were prepared to riot or go on a hunger strike for a smoke.

“I spoke to a prisoner in custody last night and he said that basically all hell’s going to break loose, prisoners will riot, they’ll even starve, etc, until the prison officers give them back their tobacco,” David told 3AW on Tuesday.

“Ten years (ago) they tried this and it lasted about 30 minutes until the prisoners started rioting and they ended up giving them their tobacco back.”

The government flagged a ban would be put in place about a year ago and since then the Corrections Department had been working with Quit Victoria to tailor programs specifically for the inmate population.

“We’ve been working diligently through a whole range of activities and plans to be able to manage [the] prison population in the lead up to our non-smoking in our prisons,” Ms Shuard said.

“These people are on remand … so they are the people that won’t have come as much on the journey with us around ceasing smoking, because they are newly arrived people in our system.”

About 84 per cent of people going into the state’s 14 prisons smoke and about 1300 prisoners, or 20 per cent of the prison population, have attended Quit programs up until the end of May.

The Metropolitan Remand Centre is a 1,000-bed facility, 24 kilometres west of Melbourne’s CBD.

Several high profile prisoners are believed to be housed in the centre including terror-accused teens Sevdet Besim and Harun Causevic, and former Bandidos enforcer Toby Mitchell, who is understood to be in isolation.