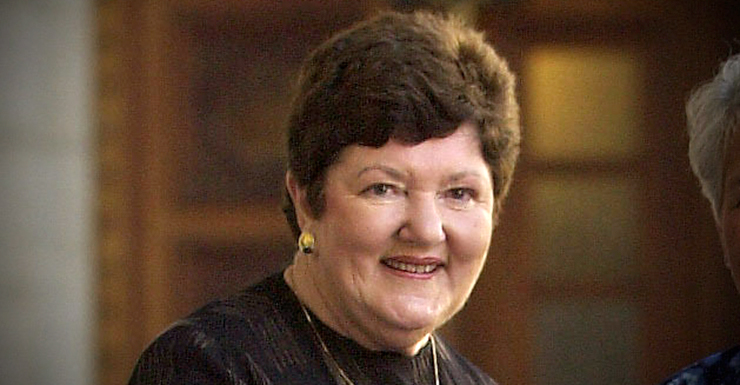 In her maiden speech to the Victorian parliament, Joan Kirner pledged, above all else, her allegiance to Labor Party principles of social democracy, social justice and freedom of speech.

It was a pledge from which she never wavered, even in the face of one of the greatest crises ever to confront an Australian leader.

Ms Kirner’s adherence to Labor values lived with her through 12 years in the Victorian parliament, two of them as the premier of the state.

And they stayed with her after her political career ended in unfortunate circumstances.

Ms Kirner, who has died aged 76, was a tireless crusader for women and education, a politician so capable she became her state’s first woman premier and a person of great humour and compassion.

But in the broader community, it is for polka dot frocks that she might be best remembered – even though she never owned or wore one.

Ms Kirner credited her father John for her alignment with socialist politics and her mother Beryl for her determination.

“Dad was a great advocate for social justice and a very quiet advocate of the essential Labor values,” Kirner once told an interviewer.

“Mum was an absolutely determined woman. She was determined I would have a good education, and they went without all sorts of things to ensure it.”

Ms Kirner also developed from her own school days, and those of her children, a passion for education reform that she took with her when she entered parliament in 1982 as MLC for Melbourne West.

She went on to enter the Cain government’s cabinet in 1985 as minister for conservation, lands and forests, moving to the lower house at the 1988 state election, assuming the education portfolio, a job she said she aspired to even before she became a politician.

Ms Kirner became deputy premier in 1989, at a time when Victoria was in crisis as the state’s financial institutions were on the brink of insolvency, the budget deficit was unsustainably high, the Labor Party was deeply divided and the unions preached open hostility against their traditional political allies.

By 1990, John Cain’s support had evaporated in the face of mismanagement and waste and the party elected Ms Kirner to a job in which she was doomed to fail.

Among the drastic measures taken in a bid to restore some form of financial credibility, her government sold the State Bank of Victoria to the Commonwealth Bank at a cost of hundreds of jobs. It also sold the Melbourne rail and tram networks and leased them back.

Along the way, the Kirner government lost the support of the union movement and at the 1992 state election, it suffered a massive defeat by Jeff Kennett’s Liberal Party.

As the going got tough, Ms Kirner and her government became the subjects of parody and ridicule in the media, and the polka dot dress mythology was born thanks to a cartoon in The Age newspaper.

The image caught on and, day after day, cartoonists portrayed Victoria’s first female premier as a frumpy, overweight housewife in a spotty frock. The notorious Truth newspaper headlined her as “Miss Piggy for Premier”.

To her credit, Ms Kirner did her best to laugh with her audience, holding a “Spot on Joan” concert, and declaring the spot a badge of courage.

“I’ve never had any problem with criticism,” she said later.

“I’ve given a lot and I’ve copped a lot. But I believe I’ve got a role to play by insisting that women be judged by their contribution – not somebody’s view of what they should be about.”

Ms Kirner stayed on as opposition leader for two years and remained active in community and political affairs.

She devoted much of her energy to EMILY’s List, an organisation that promotes women’s careers in politics.

In 1980, before she entered parliament, Ms Kirner was made a member of the Order of Australia for services to the community and in 2012 she was named as a Companion of the same Order for “eminent service to the Parliament of Victoria and to the community”.