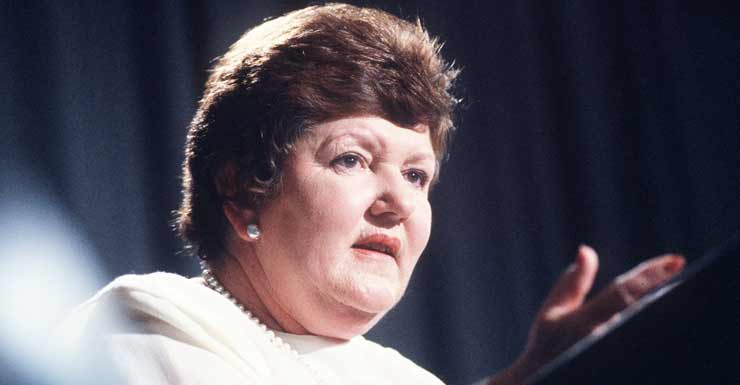 Joan Kirner has been remembered as a trailblazer, mentor and an inspiration following her death on Monday.

The former Victorian premier died aged 76 after a nearly two-year battle with oesophageal cancer, prompting tributes from both sides of politics.

Ms Kirner took over as Labor premier in 1990 from John Cain, who resigned. She led the party until 1992 when Liberal leader Jeff Kennett won office.

Prior to becoming premier, Ms Kirner held ministries of conservation, education and was the deputy premier in 1989 before assuming the leadership.

• Joan Kirner – the polka dot premier
• Australian politics: where have all the women gone?
• Former PM Malcolm Fraser dead at 84

In 1996 she jointly created Emily’s List, a Labor group that advocates for women holding political seats.

According to a biography of Ms Kirner published on the Encyclopedia of Women in Leadership, Ms Kirner said her success in politics was helped along by a network of supportive women.

“No woman in politics can survive and be successful without a network of women … I would not have survived two years as premier of Victoria without the support of women colleagues and women friends.”

In a statement, former Prime Minister Julia Gillard said: “Joan was the truest of friends. She was one of the dominant influences on my life.”

Ms Gillard said Ms Kirner was “an inspiration and a mentor”.

Former NSW Premier Kristina Keneally said Mrs Kirner was a strong leader in tough times and a champion for women.

“She showed me great kindness and encouragement, which I treasured,” she tweeted.

Ms Kirner’s family paid tribute to her political career, including her work promoting women in politics.

“Since then, the organisation has supported more than 400 women to campaign for office, with more than 210 elected.

“Joan was unpaid coordinator for the first seven years of Emily’s List’s existence.”

Ms Kirner is survived by her husband Ron, children Michael, David, and Kate and their families.

In the statement, her family thanked “the wonderful doctors and staff at Peter [MacCallum Cancer Centre] for their kindness, tireless dedication and support”.

Tributes for Ms Kirner have flowed from senior Labor figures including Federal Opposition Leader Bill Shorten, who said she was “dauntless” and a “leader of the march of women through the institutions of power”.

Mr Shorten remembered her for her wicked sense of humour and love of AFL team Essendon.

“Joan was a teacher and over the course of her life she gave us all a lesson in the meaning of dignity,” he said. “She stood proud and firm in the face of difficulty. She smiled often and she meant it.

“Education was the bedrock of Joan’s life and schools were the foundation of her career. She was an ordinary Victorian parent, but she had an extraordinary vision for the future of our children.”

“In her last years, Joan gave us so much of her time. We’re thankful for every second of it,” he said.

“Her humour kept us humble and her counsel was always welcome. She was a teacher to the end.

“She fought every day for fairness. Our state is stronger for her service and our lives are greater for her friendship.

“She was our first female premier and because of her work, she won’t be the last.”

Former Victorian premier Steve Bracks, who worked for Ms Kirner when she became premier, called her a woman of great warmth and empathy.

“[She was] also someone who took on great leadership roles and had a determination about her as she took those on,” he told 774 ABC Melbourne.

“She never flinched. She was resolute in making sure she’d do the best she could as premier of the state.”

Mr Bracks said Ms Kirner would be remembered for her strong sense of social justice.

“That was really the value that Joan Kirner brought to everything she did,” he said. “She hated unfairness. She was about social inclusion, social justice and she really set about her life and her whole career to redress wrongs.”

Essential viewing as we hear of the passing of Joan Kirner. From ABC TV’s The Late Show: https://t.co/wn2h94E09w

“Joan made politics more human. She embodied all the elements of good leadership and good life – a belief in love, family, sharing, participation and inclusion,” Ms Kovac said in a statement.

“I am grateful that I got to know her, not just as a politician, who made my school, Mullauna Secondary College, a remarkable, progressive place to learn, or as an icon of women’s leadership, but as a mentor and friend.

“We shared highs and lows of political and personal achievement together – the rise and fall of Julia Gillard as prime minister; the cancer diagnosis – she was always positive, philosophical and brave.

“I will miss that generous, wellspring of wisdom.”