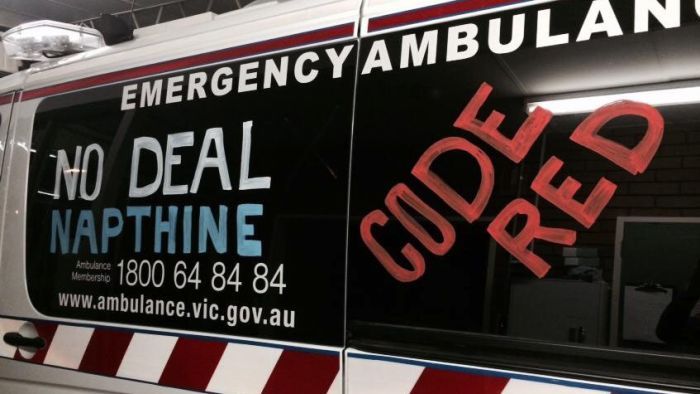 A Victorian ambulance with No Deal Napthine, Code Red written on the window, during a long-running pay dispute.

Victorian ambulance workers have reached an agreement with the State Government over a long-running pay dispute.

The deal is expected to be announced today and includes a 3 per cent pay rise per year, along with a $3,000 sign-on bonus to make up for missed pay rises over the past four years.

Fair Work Australia will also hold a full hearing next year to assess the ambulance union’s “work value case” to decide whether further increases are warranted.

Resolving the pay dispute was one of the Labor Party’s key election promises and came after a two-year industrial dispute with the previous Coalition government.

“Just in the last few weeks alone, paramedics have really had a weight lifted off their shoulders just because of the hostilities that were in our negotiations prior to the election,” Mr Ghie said.

“Obviously seeing the light at the end of the tunnel … clearly there’s a lot of pressure off paramedics now and we’ll be able to concentrate on making sure that there’s a better ambulance service for Victoria.”

The previous government offered paramedics a 6 per cent pay increase in 2014 and a $3,000 sign-on bonus, but the union refused to sign up.

The main sticking points were proposed changes to rostering for country paramedics and moves to drop a subsidy paid to union delegates.

Mr McGhie said the union had been in negotiations with the Department of Health and Ambulance Victoria for the past two weeks to reach the deal.

“We’ve very hopeful that it will be rubber stamped by Government today,” he said.

“The negotiations have been conducted in a terrific and amicable way, and we’ve progressed our discussions to have a final position in a two week period.”

Victorian ambulance have been painted with colourful slogans for the last two years, but paramedics washed them off as a sign of good faith ahead of negotiations with the new Government.