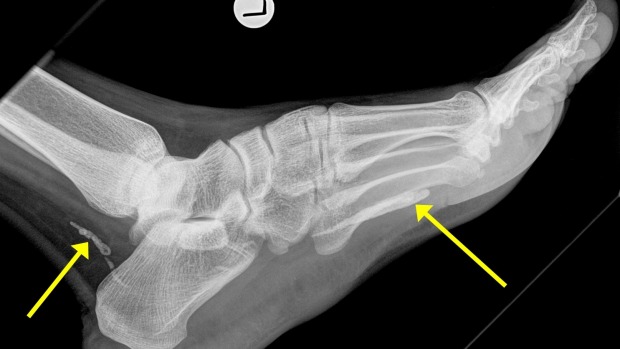 A parasitic worm has been found in the foot of a Melbourne man who is believed to have been living with it for a number of years.

The man, a Sudanese migrant who has been living in Melbourne for four years, was seeking treatment for a swollen foot when doctors made the shocking discovery.

The parasite, which typically burrows into the host’s intestines before leaving the body through a blister, was found curled up inside the man’s ankle and foot.

The parasite can grow up to several metres long, but was found in a small pieces and removed from the man’s foot, allowing him to make a full recovery.

Doctors believe the worm, known as the “Guinea worm”or Dracunculiasis medinensis, had died and disintegrated inside the foot over a number of years.

The Guinea worm is found in Africa and usually enters the body through drinking water contaminated by water fleas that have ingested parasitic larvae.

When swallowed, the larvae burrow into intestines and develop into adult worms.

“It can sit inside the human body alive for years or die, degenerate, and then cause problems in the area like it did for our patient,” Dr Darby told Fairfax media.

“If you google it, you’ll find some fairly dramatic photos of people getting match sticks and twirling their worm out centimetre per day.”