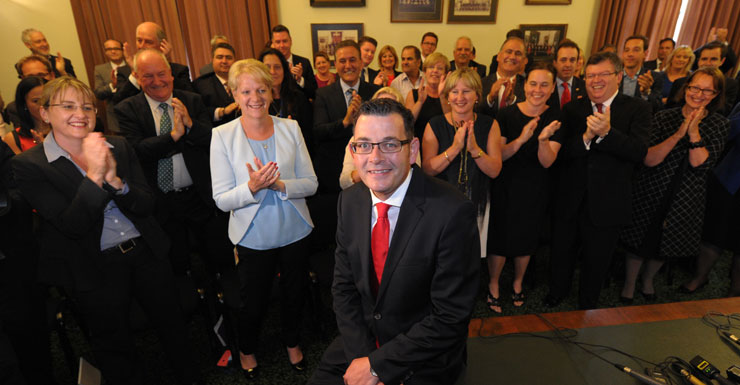 Victoria’s new Labor government has unveiled a female-friendly cabinet team while the Liberals prepare to elect their new leader.

The new ministers will be sworn in at Government House on Thursday, when their portfolios will also be announced.

Unveiling his team at his first caucus meeting since being elected, Premier Daniel Andrews described it as the most diverse in Australia.

The party would now get to work on its pledges to rip up 50 level crossings and restore TAFE, Mr Andrews said.

The Victorian Nationals selected Peter Walsh to replace Peter Ryan as their party leader in a party room meeting on Wednesday night.

Stephanie Ryan will step up to fill Mr Walsh’s former role as deputy leader just days after being elected to parliament for the first time as Member for Euroa.

The contest for the Victorian Liberal leadership will unfold on Thursday between Matthew Guy and Michael O’Brien after Denis Napthine announced on election night he would stand down as leader after the coalition defeat.

Mr Guy, the outgoing planning minister, has said he wants to defeat the new Labor government after just one term.

Mr O’Brien, treasurer for about 18 months in the Napthine government, says the challenge will be between friends, and the party will unite behind whoever wins the leadership ballot.

The Liberal incumbent in Prahran, Clem Newton-Brown, who is locked in a fierce battle to keep his seat, will reportedly nominate for deputy leader.

Mr Newton-Brown’s fortunes improved late on Wednesday when the Liberals overtook Labor in the vote count.

As at 5pm, Mr Newton-Brown was 72 votes ahead of Labor’s Neil Pharaoh after trailing him earlier in the day.

At one point just 14 votes separated them in the two candidate preferred count.

The contests in Bentleigh and Frankston also continue to remain tight.

In Frankston, Labor is leading the Liberals by 164 votes, while in Bentleigh the ALP’s Nick Staicos leads sitting Liberal member Elizabeth Miller by 319 votes.