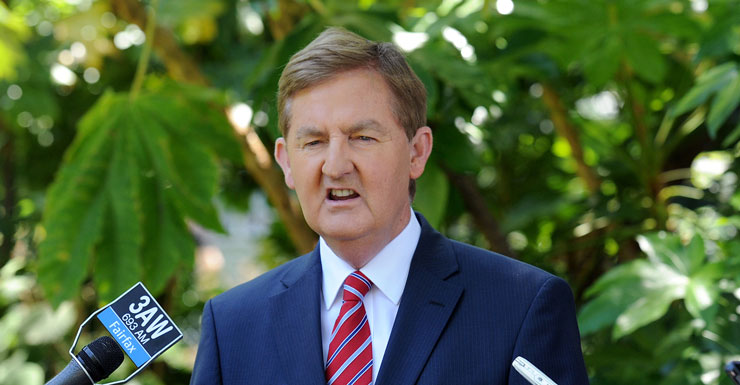 Victorian Nationals leader Peter Ryan is standing aside, saying after 15 years as party leader, and the coalition’s state election loss, it is time.

Vote counting continues but the Victorian Nationals are expected to hold eight lower house seats, down from the 10 it won in the 2010 election.

Mr Ryan, who was also deputy premier in the ousted government, said he welcomed two young new MPs to the Nationals’ ranks – Emma Kealy in the seat of Lowan, and Steph Ryan in Euroa – and said that was the direction the party needed to head.

• Who, us? Vic election not our fault: federal ministers
• Labor rises to power: we won’t let you down

“That is reflective of the change which the party needs to bring, not only to its leadership but into its ranks more generally,” Mr Ryan told reporters in Melbourne on Monday.

“It has been an honour to lead the party through opposition, but more particularly in four years of government.

He named his introduction of PSOs (Protective Services Officers) as police minister, road safety measures that reduced the road toll and his $1 billion regional growth fund as proud moments.

Mr Ryan said the party would decide his successor, but that his deputy Peter Walsh would be “terrific” in the role.

The same party meeting where the leadership is decided will also discuss the future of the Nationals’ formal coalition with the Liberals in Victoria, in place since 2008.

Mr Ryan said they were “two fiercely proud, independent parties” but history showed that if Labor was to be defeated then a coalition was required.

“As a principal, I think the coalition should remain intact but of course that is a matter for the members of the party,” he said.

Mr Ryan said the coalition government, and Premier Denis Napthine, had thrown everything into the election campaign but that Labor had made better use of social media and was assisted by the unions.

The “unhelpful” intervention by federal Nationals MP Barnaby Joyce in the seat of Shepparton was also a major own-goal, he said, with an independent likely to win the seat.

“I am not churlish about this – there is not a bone in my body of that nature,” Mr Ryan also said about the coalition’s election loss.

Mr Ryan will stay on as a local member and serve out his full term.