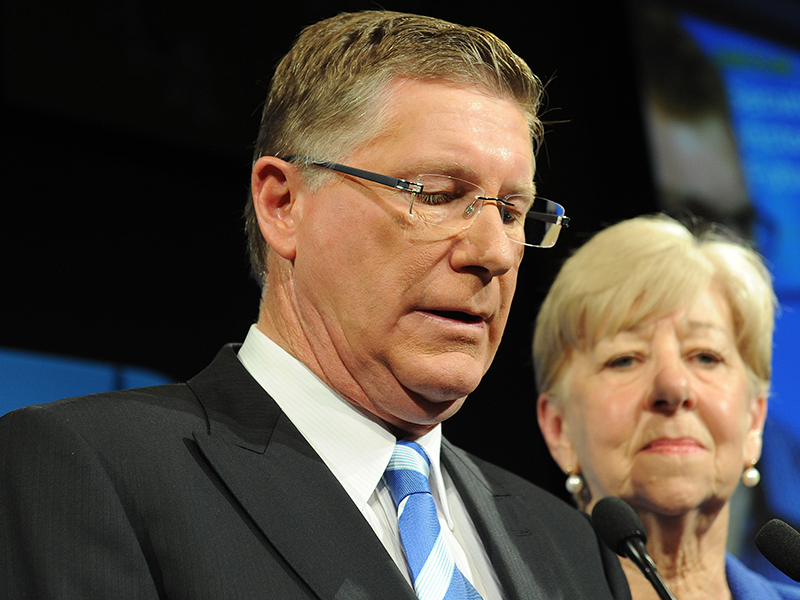 For some unknown reason the Victorian Electoral Commission won’t start counting the 1.1 million pre-poll votes until Monday morning, but unless an overwhelming majority of those miraculously go to the Liberals and Nationals they cannot retain government.

Labor is back in power. Premier Denis Napthine graciously conceded as much late Saturday night.

Labor is supremely confident the almost-three per cent swing it picked up on the night will be reflected in the pre-polls.

So the Liberal-National Party Coalition government has made history, but for the wrong reasons – the first oncer in 60 years. And make no mistake about it – the state Liberals believe they received absolutely no help from the Abbott Government in Canberra.

State Liberal minister Mary Wooldridge had no doubt federal issues had been very important. On the ABC election panel she nominated the hike in petrol tax and the cuts to the ABC all before the election as significant negatives.

A Labor power broker is more brutal: “Tony Abbott threw Denis Napthine under a bus. He could have waited till after the election on both.”

He also nominates raising the prospect of a GST on food early in the campaign and the Medicare co-payment fiasco in Canberra last week.

@TonyAbbottMHR can’t make it to Vic for our state elections, you are toxic Tony and no one wants you near them #auspol

Deemed “box office poison” by @LiberalVictoria, @TonyAbbottMHR kept a low profile in the Vic campaign but his unfair Budget was ever present

“Tony Abbott did no favours to Victoria (the state coalition government) by the way he’s conducting government in Canberra,” he said.

Abbott’s factional ally and cabinet colleague Kevin Andrews bravely rejects this view outright. He says: “If there is a substantial swing any federal factor would be minute.”

Andrews points to the fact that the New South Wales Coalition government is consistently and clearly ahead of its Labor opponents. He also takes comfort from the recovery in Newspoll of the Campbell Newman LNP government in Queensland.

What he conveniently ignores is the fact that the prime minister was not welcome on the Victorian Liberal campaign. He made one appearance and provided a TV image that had Labor backroom strategists high fiving. That’s when he gave Dennis Napthine a big hug.

Clearly if the party polling showed him as a positive he would have played a much more high profile role as he did in state elections in New South Wales, Western Australia and Queensland when he was on the up and Labor’s Julia Gillard was toxic.

The fact that Victoria has the highest unemployment for 13 years cannot be ignored and it is here that there are some ominous lessons for the Federal Government.

The demise of Ford in Victoria and the reality that the Abbott government gave up on car making in Australia goes a long way to explain Labor’s winning performance in Geelong region seats. Labor picked up the seat of Ballarine against predictions.

The shock of the night was the loss of the safe Nationals seat of Shepparton to an independent. Clearly voters have not forgotten or forgiven the Abbott Government for its unwillingness to do anything to help the region’s key industry, fruit processor SPC out of its difficulties. Federal Agriculture minister Barnaby Joyce came in for special criticism for his hands off role in that episode.

One senior Victorian federal coalition backbencher says the PM and his cabinet need to learn quickly to be more pragmatic and less ideological.

But perhaps the biggest lesson of the night is that a one-term government in Canberra is no longer out of the question. A new precedent has been set. A point that Mary Wooldridge made at the end of the night on the ABC panel.

And that’s a view shared by former NSW Labor premier Kristina Keneally, who tweeted: “One term is the new black.”