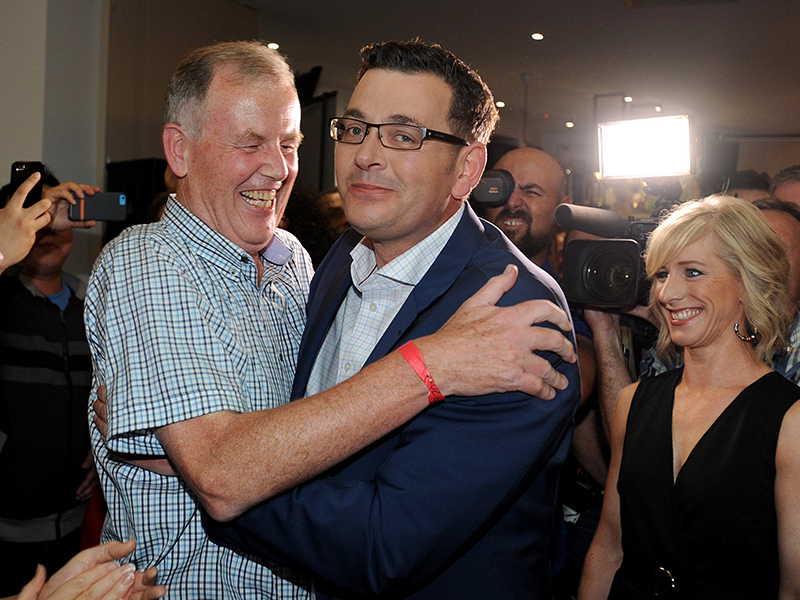 After just one term in government, the Victorian Liberal-National coalition has been thrown out of office.

Labor, led by Daniel Andrews, has taken back power after the Victorian electorate punished Denis Napthine’s government for failing to deliver on election promises and for unpopular policies of the Abbott Coalition government in Canberra.

While there are still more than a million pre-poll votes to count, the result is in line with polling which showed the Andrews’ Labor opposition would win a clear majority. The swing to Labor is in the region of three per cent.

In a speech to the party faithful in his electorate of Mulgrave, Mr Andrews said he would not let Victorians down.

“We will not let them down.”

“I know there are still many postal votes to be counted but the figures clearly indicate that there has been a swing to the Labor Party and they will have a majority in the Legislative Assembly.

Tis morning, and the only sound to be heard are knifes being sharpened by @LiberalVictoria members. This may get ugly. #Vicvotes #Auspol

LIB blame game frenzy begins as they start to eat their own. The morning after bringing realisation that #OneTermTony is possible #vicvotes

“Therefore, it’s appropriate for myself as leader of the Government, as leader of the Liberal Party, to do the right thing by the people of Victoria and to contact Mr Andrews and inform him that I have conceded.”

Dr Napthine, who is on track to safely retain his regional seat of South-West Coast, said he would stand down as leader of the Liberal Party following the defeat.

“We are people who have got a great contribution to make to Victoria.

“We will continue to make that contribution as a hard-working, dedicated opposition that holds government to account.

“And we will be back at the next election offering the people of Victoria a real alternative.”

Beaming and giving a double thumbs up to chants of “we want Dan”, Daniel Andrews appeared every inch the Labor hero he’d been introduced as.

The new Victorian premier stood before a sea of jubilant red-clad supporters and promised his government would be founded on common sense, hard work and a determination to listen to Victorians.

“I want to acknowledge his service to his local community and to our state and I want to inform you that I, on behalf of all of us here tonight and all Victorians, I wish Denis Napthine, his wife Peggy and their family all the very best for the future,” he said.

The winning party needed at least 45 seats to form government.

“We are definitely giving the Labor Party 47 seats. So we are saying they are definitely in Government,” ABC election analyst Antony Green said earlier.

“37 for the Coalition, a Green and another.”

However, Green said early counting in the Upper House showed Labor might not have an easy time in government.

“At the moment Labor’s got 13 seats and the Greens have got five,” Green said.

“There is a Family First member, a DLP member, Australian Country Alliance and three Shooters and Fishers candidates elected – that’s the numbers with only half counted.

“At the moment, Labor plus the Greens will have 18 and then Labor will be negotiating with the Shooters Party, DLP, Country Alliance and Family First.

“This is the last Senate election writ large.”

Going into the election, Dr Napthine and the Coalition held power by the slimmest of margins.

The Liberal MP for the bellwether seat of Bentleigh, Elizabeth Miller, said the Coalition had run a good campaign.

In north-east Victoria, independent candidate Suzanna Sheed is predicted to cause a major upset to win the seat of Shepparton, which has been held by the Nationals for 47 years.

Green said the National Party’s vote was down in country Victoria.

“That’s a disappointing result for the National Party … if we look at what’s happening in the regional cities, the Labor Party has done well,” Green said.

Nationals leader Peter Ryan described the Coalition position after the vote as “grim”.

“I think the reality is that we were, for a variety of reasons, unable to sell our basic message to do with strong economic performance … it didn’t wash with the public,” Mr Ryan said.

The Greens have claimed victory in the Lower House seat of Melbourne, while the seats of Richmond, Brunswick and Prahan were too close to call.

Ellen Sandell attracted 52 per cent of the vote in the seat of Melbourne compared to Labor’s 47 per cent on a two-party preferred basis.

In the Upper House, the party was quietly confident of gaining an extra four seats, giving them the balance of power.

Sue Pennicuik and Greg Barber have kept their Upper House seats, while Colleen Hartland’s western region seat is too close to call.

“We did it with a bottom-up, grassroots, one vote at a time door-to-door campaign, and every one of you participated in that and you know that,” Mr Barber told supporters.