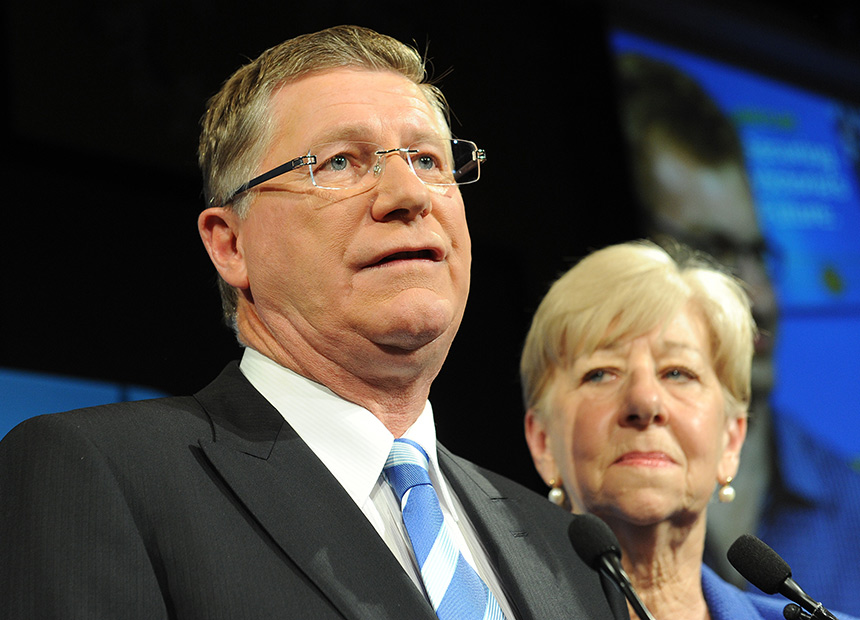 The Napthine government has been booted from office after only one term, the first Victorian government to do so since 1955.

“We could not get the clear air to be able to sell our message,” Mr Ryan, who is also deputy Premier, told ABC Television late on Saturday.

“It made it difficult at every turn to be able to get out of the blocks and that prevailed over a period of many, many months.

“When you think of it, to have the only AAA-rated economy in the Australian nation is an outstanding achievement and yet we could never make the most of it.”

The coalition changed premiers – from Ted Baillieu to Denis Napthine – mid-term and Liberal-turned-independent Geoff Shaw posed as long-running irritant to the government.

“The other thing that happened to us was in the areas of service delivery, our (Labor) opponents were able to use very well … the union movement being behind them, with the paramedics, with the firefighters, with the teachers, with the nurses,” Mr Ryan said.

“They were able to use that resource very well and it’s one we could not contest in terms of the sheer numbers.”

The closest Tony Abbott came to campaigning in the last weeks of a neck-and-neck election race was to stand on the deck of a warship in Sydney, partly built at the Williamstown dockyards in Melbourne.

As Victorians prepared to vote, senior Liberal campaign strategists fired a broadside at their federal colleagues and the prime minister’s impact on the campaign.

But the defence of the prime minister comes after reports that a senior Victorian Liberal campaign strategist had described Mr Abbott as “box office poison”.

As Mr Abbott on Friday launched HMAS Canberra in Sydney, federal Opposition Leader Bill Shorten did make the trip to his home town, where he suggested a Titanic-like maiden-term defeat showed the prime minister’s “broken promises are not going down well in Victoria”.

“Well, first of all, let’s call it for what’s really going on in Victoria. Tony Abbott does not want to come to Victoria,” Mr Shorten said.

“What we’ve had is the former Liberal PM John Howard here, probably the … next Liberal PM here (in Julie Bishop), but Tony Abbott is not here.

“They’ve been in government now for well over a year and they are adrift at sea.”

Back to the backbench: what went wrong for Napthine?