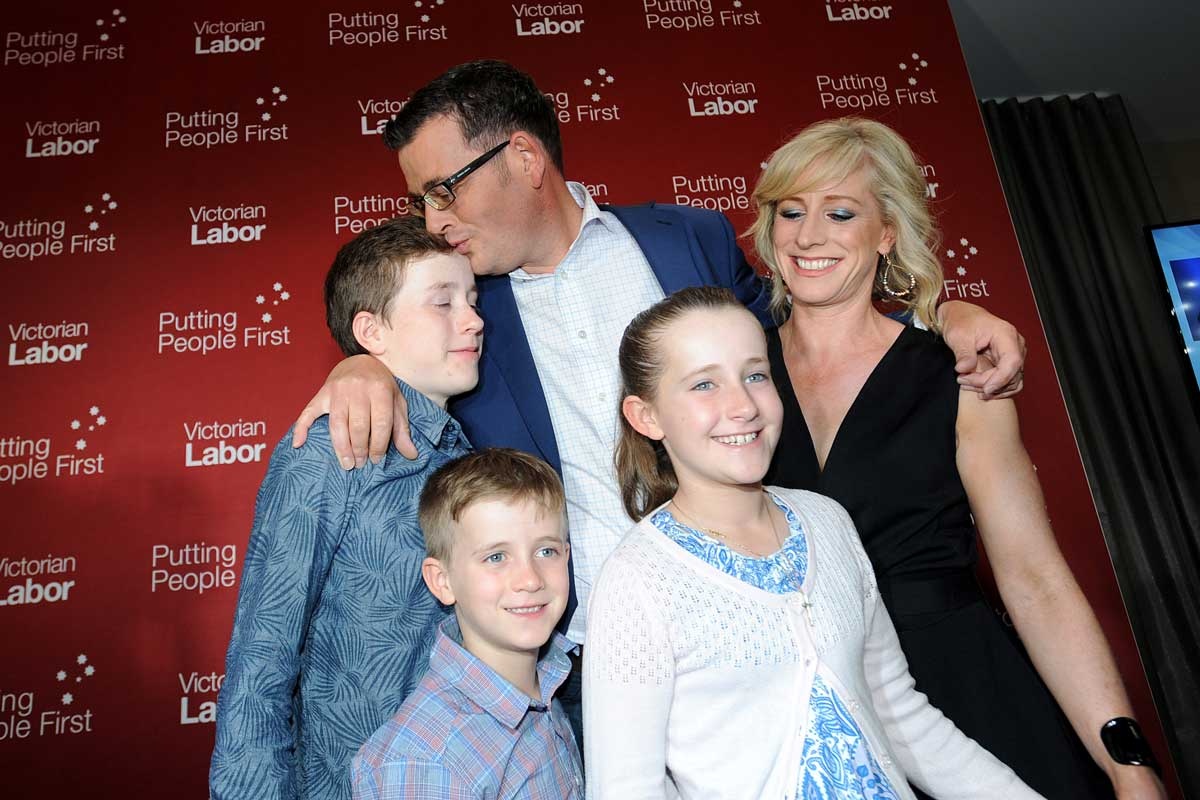 Daniel Andrews has thanked Victorians for giving him the greatest honour by electing his Labor party into government.

“The people of Victoria have today given to us the greatest of gifts,” the incoming premier said in claiming victory on Saturday night.

“Ladies and gentlemen, we will not let them down.”

“I want to thank Denis Napthine for his gracious concession. I want to acknowledge his service to his local community and this state,” Mr Andrews said.

With his wife Cath and three young children by his side, Mr Andrews took to the stage around 10.15pm and outlined what Labor would do in government.

“The people of Victoria have today said no to tired negative politics. They have, instead, embraced and supported an optimistic and positive plan for our state’s future,” he said.

“A plan that is grounded in common sense, hard work and a determination to always listen to the great people of this great state.”

He reasserted his election promises, including the removal of 50 of the most dangerous level crossings, ending the ambulance dispute, repairing the TAFE system, improving local roads and public transport, and getting people back to work.

He said he would get to work straight away.

“That work begins tomorrow because I will not accept four more years like the last four.”

Mr Andrews said “the very first piece of paper” he will sign as premier will be to send the ambulance pay dispute to the fair work commission.

But the new premier failed to mention “ripping up the contracts” for the controversial East West Link which had been a cornerstone of his campaign.

Mr Shorten arrived at the new Victorian premier’s election party to chants of “you’re next”.

Earlier, Denis Napthine conceded defeat and quit as Liberal party leader, despite more than a million pre-poll votes still needing to be counted.

“I can say that it is time for me to step down as leader,” he said at the end of his concession speech.

“I believe the party has plenty of opportunity to choose a new leader for a new future so that the Liberal Party will continue to be a strong, dynamic political force here in Victoria.”

He said he had telephoned Mr Andrews to offer his congratulations.

“The figures clearly indicate that there has been a swing to the Labor Party and they will have a majority in the legislative assembly,” he said.

“Therefore, it’s appropriate for myself as leader of the government, as leader of the Liberal Party, to do the right thing by the people of Victoria and to contact Mr Andrews and inform him that I have conceded that he has won this election and we congratulate Mr Andrews on that victory.”

With his wife Peggy and children by his side, a solemn Dr Napthine told the crowd at the Sofitel that he had been proud to have led the state.

“I am extremely proud to have had the honour and privilege to be the premier of this great state of Victoria,” he said.

“This is the greatest state in the best country in the world.

“And I am particularly proud that today in 2014 Victoria is a better, stronger, more financially secure state than when we came to government four years ago.”

The 62-year-old Dr Napthine came to power when Ted Baillieu surprised Victorians by resigning in March 2013.

He stepped into a hung parliament with rogue former Liberal Geoff Shaw calling the shots.

The Greens claimed the seat of Melbourne, the party’s first seat in the state’s lower house, with Ellen Sandell expected to win.

Ms Sandell was loudly cheered as she thanked the party faithful for their support in winning the Greens’ first ever lower house Victorian seat at an underground inner city laneway bar.

“This victory doesn’t belong to me at all, it belongs to all that knocked on doors, made calls and spent your evenings, your nights working for the Greens,” Ms Sandell, 29, told those gathered,

“I’ll work every day starting tomorrow for a fairer society and a cleaner economy.”

‘No regrets’ for Geoff Shaw

Liberal-turned-independent MP Geoff Shaw says he has no regrets about his time in politics, as the early vote count indicated he would lose his seat of Frankston.

Mr Shaw entered the Victorian parliament as a Liberal but ended it as long-term irritant to the Napthine government.

His defection to the cross bench eroded the government’s thin majority, and his suspension for misuse of parliamentary entitlements caused a period of deadlock in the lower house.

“So no, I don’t regret my time in parliament, and out of it I met some people who will be long-time friends.”

Mr Shaw also said the Napthine government was being punished by voters for “picking on one person all the time instead of concentrating on policy”.

“If they are going to lose its because of their lack of leadership. Both parties lack leadership – the Liberal party do, the Labor party do.”