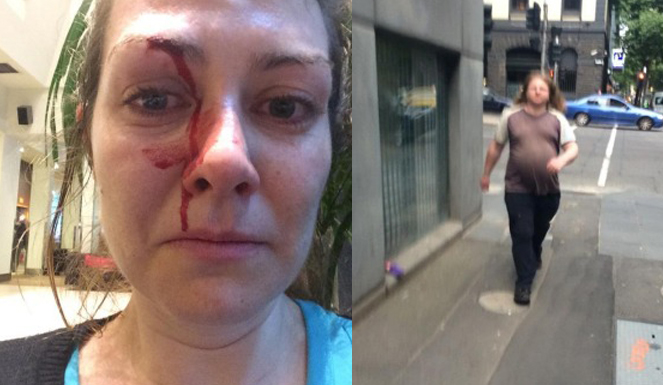 A Melbourne woman who was randomly attacked in the CBD has used social media to catch the man who allegedly punched her.

Toorak woman Erica Moloney was hit in the face after leaving a gym in the city on Wednesday night, according to a Fairfax report.

• Two years on: Tom Meagher pays tribute to Jill
• Comment: Being a woman shouldn’t be this scary

Ms Moloney bravely chased the man and took his photo, posting the image on Facebook along with another photo of her bloodied face.

“If you see this (blurry) monster keep a safe distance and maybe call the cops,” the 32-year-old wrote.

While Ms Moloney was giving evidence to police, a friend of hers who came to her aid recognised the offender walking past after seeing the Facebook image.

“My friend was sitting there for moral support and as I was talking to the police he noticed someone who looked familiar. He said ‘that’s not the guy is it?’,” she said.

“I turned to look and knew it was him.”

Victoria Police arrested the 33-year-old Queensland man for two counts of intentionally causing serious injury and one count of being drunk in public.