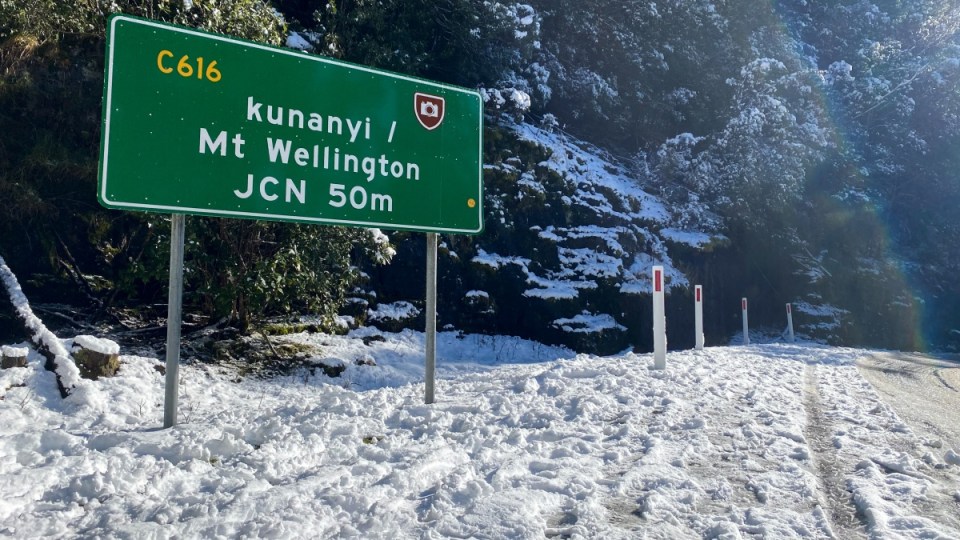 Hobart's popular and scenic Mt Wellington and its surrounds can be treacherous in bad weather. Photo: AAP

Eight people stranded in blizzard-like conditions on Tasmania’s Mt Wellington have been rescued.

Two of the walkers are lucky to have survived the ordeal on the summit overlooking the capital Hobart, police say.

News of the rescue follows the death of a woman struck by a falling tree in stormy weather on the state’s northwest coast.

Authorities say shortly after midday on Saturday a group of four walkers became exposed to wild winds and heavy snow at the kunanyi observation point, also known as the Pinnacle.

The party sought assistance from two other people in the area and the six took refuge in a toilet block until help arrived.

Police, ambulance and Wellington Park rangers trekked through the storm to reach the group and walk them to safety.

'White Out' ❄☃️ Amazing footage walking down a snow-covered boardwalk on the summit of kunanyi / Mt Wellington 🗻 video: https://t.co/E9qrgHb6GV pic.twitter.com/3EDnDLtWvb

A 27-year-old woman and 16-year-old girl also became disorientated in the heavy conditions on Saturday evening on the Zig Zag track, just below the peak, and contacted emergency services.

Police tracked their phones, with officers and paramedics finding the pair sheltering behind rocks near a snow-covered track about 10.30pm.

It is understood temperatures had dropped to around -6C.

The group was treated at the scene for exposure and assisted down the mountain before being taken to hospital with cold-related injuries and hypothermia.

“All the people involved started with the best intentions but ultimately some were not prepared for the extreme and variable conditions,” Senior Constable Callum Herbert said on Sunday.

“People should heed warnings about walking on the mountain and in alpine areas as both rescues … put themselves and their rescuers at significant risk.”

The pair lost on the Zig Zag track would almost certainly have perished if not for the tenacity of the rescuers, Const Herbert said.

“They were very lucky.”

More than 100 incidents of fallen trees caused multiple road closures and 15 car crashes across the state.

One motorist was injured and structural damage has been reported to some properties.

The 54-year-old woman killed at Beulah late on Saturday afternoon was one of two people trapped under the fallen tree, police said.

Both were treated at the scene.

A 55-year-old man was taken to Launceston General Hospital with serious but not life-threatening injuries.