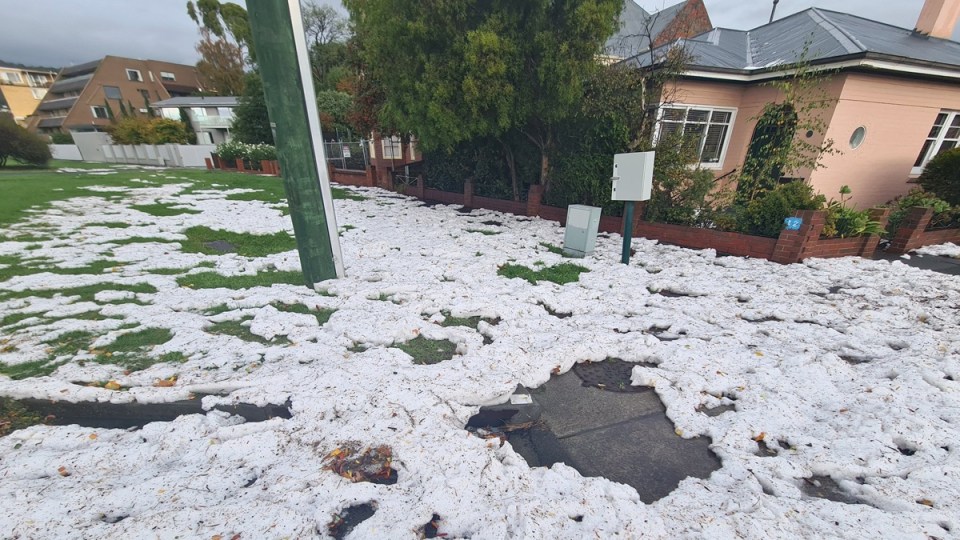 Hobart has been hit by heavy rain and hail, in wild storms. Photo: Twitter

A man has died and power has been cut to thousands of people in Tasmania’s south-east after wild storms, which also forced schools to close.

Police said a pedestrian, 81, was struck by a car near Claremont in Hobart about 9pm on Thursday. He died at the scene.

“Initial investigations suggest it was raining at the time. The driver of the vehicle remained at the scene,” Tasmanian police said.

There was a severe weather warning on Friday morning for more wild weather to come, with heavy rainfall and damaging winds forecast across the state’s south and east, including Hobart.

Some 2800 properties, all in the south, had lost power, while several radio stations were taken offline.

About a dozen schools have shut their doors for the day, the state’s education department said.

There were winds of up to 109km/h at the summit of Hobart’s kunanyi/Mount Wellington, with gusts of up to 87km/h in the city.

“The lightning and thunderstorm activity that came across the coast and Hobart [overnight] resulted in just under 100 calls [for assistance] within two hours.”

Areas in the south, including South Hobart, have had more than 100 millimetres of rain in the past 24 hours.

There have been reports of flash flooding on Hobart streets.

Several roads have been closed in the south, with authorities urging people not to travel unnecessarily.