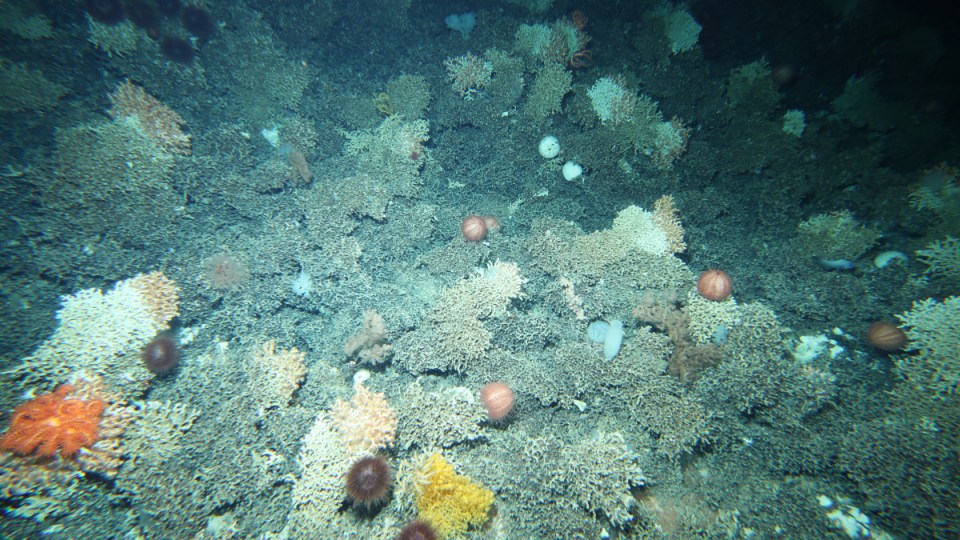 Scientists have found signs of heat stress in sponges in deep waters off Tasmania. Photo: CSIRO

Scientists have recorded bleaching for the first time in sponges in deep-shelf waters off Tasmania, in what is likely a “canary-in-the-coal-mine” sign of stress from underwater heat waves.

Waters off the island state’s east are considered a global hotspot for marine climate change as the East Australian Current pushes further south.

An Institute for Marine and Antarctic Studies (IMAS) study examined surveys of sponges living in the mesophotic zone, known as the “twilight zone”, between well-lit shallow waters and the dark deep ocean.

Lead author Nick Perkins said it was the first time such bleaching, well-documented in tropical waters, has been observed at this depth.

“One line of ecological thought is that deeper waters don’t get impacted so much … they might actually be cooler refuges for some of the shallower-water species,” he told AAP.

“But this is showing there can be impacts down at depths as well. Maybe those species aren’t so adapted to these extreme events.”

Dr Perkins said there was “a very strong linkage” between warming waters and the bleaching.

Surveys didn’t uncover any mass mortality events but Dr Perkins described the findings as an early warning, “kind of like the canary-in-the-coal-mine … scenario”.

Corals, sponges and red algae in the mesophotic zone, as deep as roughly 150m, play an important role in ocean ecology and pass on food sources.

“These deeper reefs are known to be biodiverse zones and could contain species not yet described by science,” IMAS associate professor Neville Barrett said.

“We still know very little about these systems below diving depths — how they function and how they may respond to climate change.”

The study calls for further research to better understand when sponge bleaching occurs and how long it persists.

“We’re in a global warning hotspot on the east coast of Tasmania. The thing we historically haven’t quantified very well is what is happening in deeper water,” Dr Perkins said.

The cup sponge is widespread, meaning it could prove useful in tracking the impacts of climate change.

The IMAS study, published in the journal Climate Change Ecology, reviewed surveys taken in Flinders, Freycinet and Huon marine parks between 2009 and 2017.

Bleaching in deep waters off Tasmania