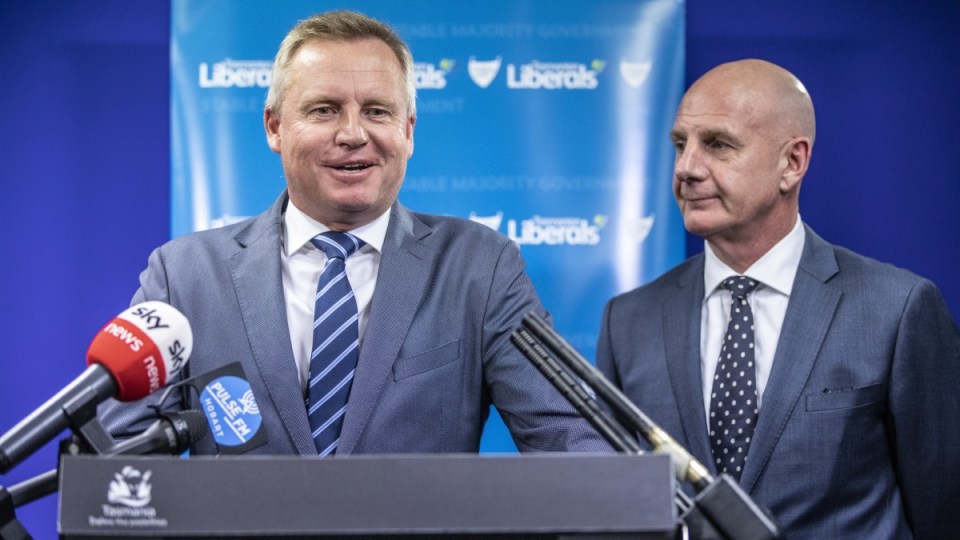 Jeremy Rockliff will replace Peter Gutwein who is stepping down at Tasmania's premier. Photo: AAP

Tasmanian Deputy Premier Jeremy Rockliff is virtually assured of ascending to the state’s top job unchallenged, as a battle looms to be his second-in-command.

State Liberal MPs will on Friday hold a partyroom meeting to decide Tasmania’s next leader, after Premier Peter Gutwein’s shock announcement earlier this week that he is quitting politics.

Mr Rockliff, who has been deputy since the Liberals came to power in 2014, has publicly indicated he wants to become the state’s 47th premier and is “optimistic” of his chances.

Infrastructure and Transport Minister Michael Ferguson was considered the most likely to challenge Mr Rockliff for the role of leader.

Mr Ferguson, one of the state Liberals more conservative voices, on Thursday said he will nominate to support Mr Rockliff as deputy premier.

“It is Jeremy’s time to lead the party,” he said in a statement.

“The government … has taken Tasmania’s economy and employment outcomes from nation-lagging to nation-leading.

“Jeremy and I have prudently worked through our plans this week, we are focused on the everyday needs of Tasmanians.

“We have a plan for the government’s continued success based on the very sound foundations we have laid since 2014.”

Attorney-General Elise Archer on Wednesday confirmed she will throw her hat in the ring to be deputy, setting up a two-way race with Mr Ferguson.

“My friend and colleague Elise Archer deserves great credit for her work as a reformer attorney-general and I welcome her nomination,” Mr Ferguson said.

Mr Gutwein was elected premier unopposed by his Liberal colleagues in January 2020 after Will Hodgman walked away from the job mid-term.

Mr Gutwein, who entered politics in 2002, cited a draining pandemic workload and a desire to spend more time with family as reasons for resigning.