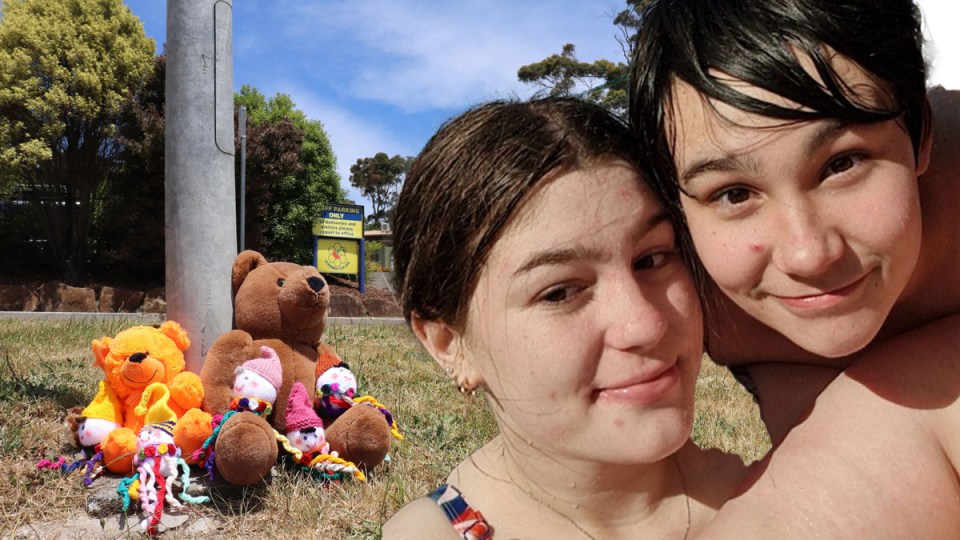 The grief-stricken mother of Zane Mellor says her “world is broken” after losing her boy in Tasmania’s jumping castle tragedy and she’s despaired “how do we go on without you”.

Georgie Gardam visited the makeshift memorial outside Hillcrest Primary School on Saturday, reportedly dropping to her knees as she clutched a PlayStation and a shirt.

It was on the same day Prime Minister Scott Morrison was in Tasmania paying his respects and said Australia was at one with the devastated families.

Zane was among five young victims who died when a jumping castle blew away at an end-of-year school celebration.

Addison Stewart, Jye Sheehan, Jalailah Jayne-Maree Jones and Peter Dodt were also killed and another three children are still fighting for their lives in hospital.

Zane’s mum took to Facebook with a heart-breaking post directed towards “the love of my life, my first born, my world”.

“I miss you beyond words, this isn’t real, how do we go on without you,” she wrote.

“We know we gave you the best life. I may of let you game a little too long or spoil you with too much McDonald’s and Hawaiian pizza and buy too many PlayStation games but everything I did in life was for you.

“I have let your online friends know you won’t be back online to smash them in Fortnite for a while.

“My world is broken… I know you hear me Zane. I am empty, I am coming to hold your hand and kiss your face baby, I love you.”

A friend of the family thanked the community for their support and urged parents to let their children play videos games for Zane.

“Anyone who knows Zane will know that he loved his gaming, in honour of our boy we hope you let your little ones play with their PlayStations, Xbox and tablets in his memory this evening, we know it’s what he would have loved the most,” they said.

Before visiting the north coast school with wife Jenny, Mr Morrison announced funding for counselling and mental health support for those affected, with first responders receiving $250,000 and $550,000 for the broader community.

“I want to extend our deepest sympathies to the five families in particular who have lost those precious young ones and we think also of the families of the three who are still in a terribly critical condition,” Mr Morrison told journalists in Hobart ahead of the trip.

“We think of the entire community that is just heaving with sorrow.

“As I said yesterday, there are no words, only prayers, for our fellow Australians in Tasmania and for the community that will carry this burden. And it will be a heavy burden. It will weigh them down.”

Mr Morrison said the money would be paid to Tasmania’s Primary Health Network over 18 months and will also add to $500,000 the Tasmanian government announced on Friday.

“We know support won’t just be needed in the next few weeks, it will be needed for many, many, many months, to try and begin that process of healing,” Mr Morrison said.

More than a million dollars has been raised in the community to support those mourning the tragedy.

Grace Johnston, who is raising money for Zane Mellor’s mother, described Zane on Friday as a beautiful, caring and gentle soul who kept achieving despite his challenges with autism and ADHD.

She said she wanted help his mother Georgie Gardam as she won’t be able to work following the tragedy.

“Georgie is the most amazing mum, she never gave up and was by his side every step of the way encouraging, loving and fighting for him,” Ms Johnston said on the GoFundMe page.

Peter Dodt’s aunt Tamara Scott also set up a fundraising page, describing her nephew as full of life and adventures, while Addison Stewart’s aunt Meg Aherne said she was trying to help her niece’s family pay for a funeral and other bills.

One of the fundraising pages, posted by Devonport local Zoe Smith, had raised just under $1 million by late Friday, with the money to go to Hillcrest Primary and its Parents and Friends committee to distribute.

Meanwhile authorities continue to examine whether the inflatable castle was properly tethered.

Responding to suggestions families have not been kept informed of the inquiry, Premier Peter Gutwein called for patience.

“I can absolutely understand their frustrations but there needs to be a proper investigation into this,” he said.

“WorkSafe is working with Tasmania Police and we do need to let that take its course.”