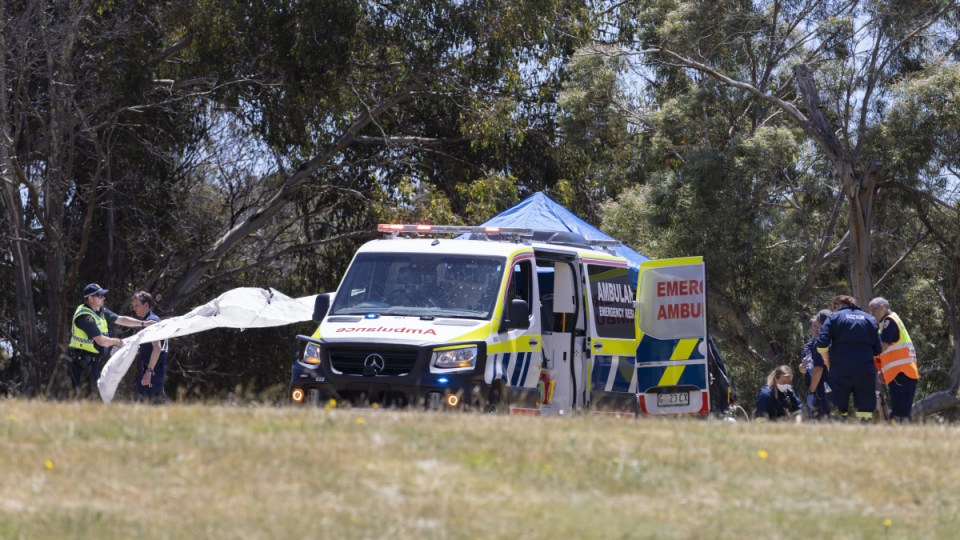 Emergency services on the scene of Thursday's tragedy in Devonport, in Tasmania's north-west. Photo: AAP

Four children are dead and five others in hospital after they fell about 10 metres from a jumping castle that was blown into the air at a primary school in north-west Tasmania.

Tasmanian Premier Peter Gutwein confirmed the death toll from the tragedy at Hillcrest Primary School in Devonport on Thursday afternoon, describing it as “simply inconceivable”.

“I’m certain that I speak for all Tasmanians in extending my deepest sympathies to the family, friends and loved ones of everyone affected by today’s tragedy,” he said.

“I know this is utterly devastating and heartbreaking for all involved.”

Those who died were two girls and two boys, all in grade six at the school.

Four of the children in hospital are in critical conditions, while the other is in a serious condition after the accident, which occurred at an end-of-year event about 10am on Thursday.

Tasmania Police Commissioner Darren Hine said many of those on the scene, including police officers and other first responders, were deeply affected by the tragedy.

“These children were meant to be celebrating their last day of primary school, instead we’re all mourning their loss,” he said.

“Today’s tragedy is something that will have a deep impact on the north-west community. And our immediate priority is supporting the children, families and staff so deeply impacted.”

“Several children fell from the jumping castle. It appears they may have fallen from a height of approximately 10 metres,” she said at the scene in Devonport.

“A number of the children have been taken to hospital and some are in a critical condition.

“This is a very tragic event and our thoughts are with the families and the wider school community and also our first responders.

“This has been a very distressing and confronting scene.”

Tasmania Police initially said a “wind event” caused the jumping castle to lift into the air.

Several rescue helicopters were used to transport the children after police units and multiple ambulance crews rushed to the scene.

Police have indicated counselling will be available to families and the community.

The school announced on Facebook it was closing for the remainder of Thursday and asked parents to urgently collect their children.

“They are just unthinkably heartbreaking. Young children on a fun day out, together with their families and it turns to such a horrific tragedy, at this time of year, it just breaks your heart,” he said.

“On behalf of all Australians – to the parents and families and friends, all who were there, to the other young children there and witnessing these events, I just pray you‘ll have great family around you and great friends and you can come through this horrific tragedy.”