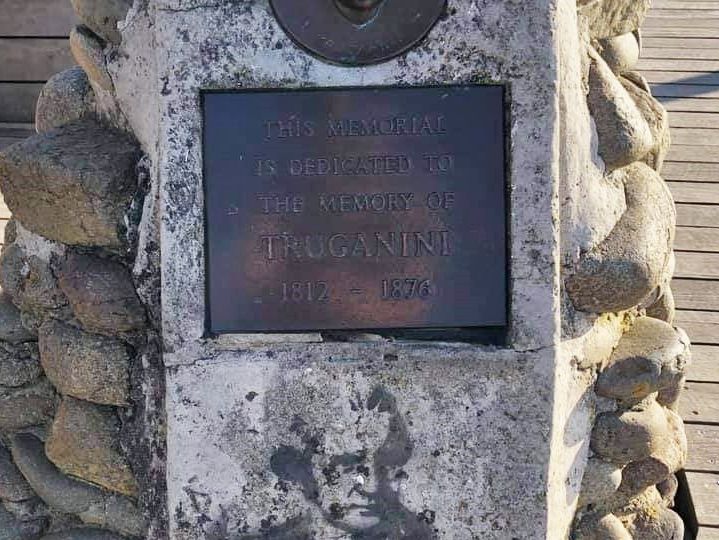 The Truganini memorial on Bruny Island with the image of Captain Cook on the cairn. Photo: Supplied

It is an indication of the “underlying racism in this country” that a monument to famous Tasmanian Indigenous woman Truganini has been vandalised with an image of English explorer Captain James Cook, an Aboriginal community leader says.

The memorial to Truganini, a stone cairn with plaque and image, stands atop the popular lookout at The Neck, Bruny Island, in Tasmania’s south-east.

It is believed sometime over the last few days, spray paint and a stencil were used to apply an image of Captain Cook’s face to the stone column.

Rodney Dillon, a weetapoona elder, said he learned of the vandalism on Friday when visiting the island’s main town centre.

“An old bloke down at Adventure Bay gave me a cuddle … said he was really sorry for what happened and that it’s not the majority on Bruny that think like that,” Mr Dillon said.

“[The man said] there are just a few people who just got really bad thoughts in them.”

Truganini, who was born on Bruny Island in 1812 and is often mistakenly cited as the last “full-blooded” Aboriginal Tasmanian, deserved better, he said.

“She was a really strong person who lived through a pretty horrific time in our lives. She deserves better … a woman of her status.

“She travelled through very rough times.”

Mr Dillon said the man who told him of the vandalism was visibly upset.

“This old bloke said he was really sorry and looked down in disgust … the majority of people on Bruny would be very sad that happened on their watch.

“That is the position we are in, Aboriginal people in this country, it shows where we are really up to.”

Images of the stencilled monument have been posted to Facebook by dismayed members of the public.

The monument, erected by schoolchildren in 1967, is at the lookout platform popular with tourists who climb the long, wooden stairway to the top to take in the spectacular view of The Neck — an isthmus connecting north and south Bruny islands.

Mr Dillon said he was puzzled to think “people 200 years on still want to do that”.

“Years ago, you’d expect that to happen, but we’ve come a long way,” he said.

In a statement, Environment and Parks Minister Roger Jaensch said the vandalism was both “disappointing and unacceptable”.

“I understand the Tasmania Parks and Wildlife Service are aware of the situation and have already commenced the work required repair the damage,” he said.

There are strict penalties in place for damaging items of historical importance on reserved land, with a maximum penalty of $8,600.

Anyone with information about the incident is urged to contact the Tasmania Parks and Wildlife Service compliance team on 0488 184 847.