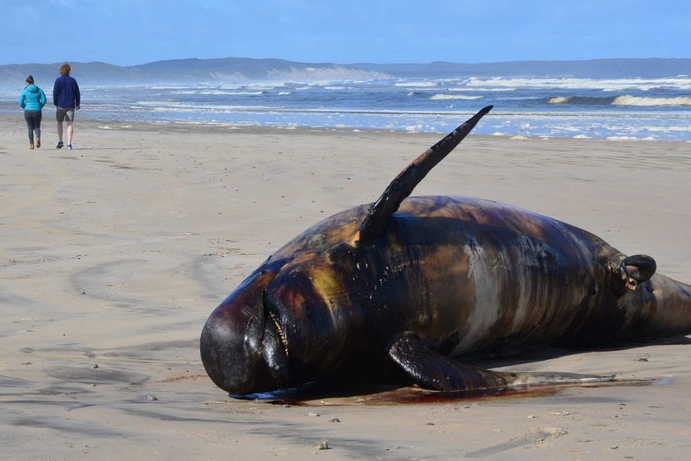 Bloated and reeking, this whale carcass rots on the Ocean Beach. Photo: ABC

Residents of a tourist town near the site of Australia’s worst mass whale stranding say the decomposing carcasses are ruining one of the area’s most popular attractions.

The carcasses of the 349 dead whales were removed from the harbour, but some have now washed up on the popular Ocean Beach, just six kilometres from the town of Strahan, and are being left to decompose.

Janice Morrison, who owns an eco store in Strahan, said she always recommended visitors go to Ocean Beach because it’s “wild and lovely”.

But she said there were at least 35 carcasses in the area near the beach’s main carpark, which had left visitors horrified.

“If you just wanted to come and take some photos of the sunset or go for a long walk to clear your mind, that’s [Ocean Beach] the place you go,” she said.

“But a lot of the carcasses have their tongues out, which is quite upsetting, and they’re starting to swell. Some of them are bleeding and their skin is starting to crack so it’s not a pretty sight.”

Ms Morrison said other locals she’d spoken to have had guests burst into tears after going to the beach.

“It’s really upsetting for a lot of people,” she said.

‘Not a good look’

The owner of Harrison House Bed and Breakfast, Ken Elliot, has been warning his guests about the carcasses, with many visitors returning from the beach surprised by the size and quantity of them.

“Ocean Beach is the longest sand beach in Tassie and it’s part of the natural beauty of Strahan, so having dead whales as a backdrop to it isn’t a good look,” he said.

“Tassie has done such a good job looking after it’s tourism industry so it can bounce back and that’s helped our local economy for sure, but having these right in our backyard isn’t great, especially when we’re about to start opening borders.”

Ms Morrison said that after a COVID-enforced closure and the stranding event, the town wanted Tasmanians to visit, but they may not if they were greeted by dead animals.

“The Government is giving money to people to travel the state and Strahan is one of the top towns to visit, but we can’t send people to see dead whales,” she said.

“If you had a choice between going to somewhere you’d heard there’s lots of dead whales and somewhere else, where would you go for a weekend away?”

She said while it’s not a quick or easy problem to fix, she believed the Parks and Wildlife Service (PWS) should look at alternatives to leaving the carcasses to rot, including moving them up the 40 kilometre-long beach or burying them.

“As they decompose, it gets harder, and no-one wants to go within a bull’s roar of them because they smell horrendous.”

‘Wave action’ to the rescue

The PWS said in a statement that the whales that died at Macquarie Harbour were disposed of in the Southern Ocean, with a small number taken to landfill.

“The removal of whales from Macquarie Harbour and on Ocean Beach closest to the township of Strahan was prioritised and completed,” it said.

“Some of the whales on Ocean Beach further from populated areas have been left in situ to allow natural processes to occur, and wave and sea action will help break up the carcasses in coming week.”

There is a chance ocean currents may cause carcasses to wash up on beaches north and south of Macquarie Heads, but the PWS said they would be left to decompose naturally.

“The Environment Protection Authority has indicated that there are no significant environmental issues with leaving the carcasses on the beach, and the odour is unlikely to reach the township of Strahan.”

“This option has been exercised following a number of previous mass whale strandings at this location, with no environmental impacts identified.”