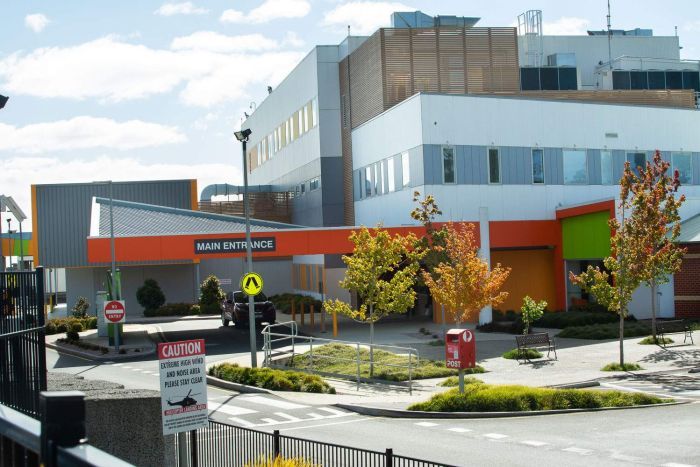 A coronavirus cluster has been linked to hospitals in Tasmania's north-west. Photo: ABC News: Rick Eaves

The Ruby Princess cruise ship is the likely “ground zero” of a deadly coronavirus outbreak in north-west Tasmania, an investigation has revealed.

Eleven of the state’s 12 virus deaths have been in the region, the latest an 86-year-old woman on Wednesday.

On Thursday, Premier Peter Gutwein released findings of an interim state government report into the cluster, in which scores of health workers and patients in Burnie tested positive.

“What the report confirms is that most likely that ground zero for the outbreak at the North West Regional Hospital was the Ruby Princess,” he said.

Mr Gutwein said the report indicated many health workers had continued to work, unaware they had the virus.

“Nobody should use this report to ascribe blame to anyone.

Two passengers from the Ruby Princess were admitted to Burnie’s North West Regional Hospital in late March, with the first healthcare worker case confirmed on April 3.

Of the 73 staff who tested positive by April 21, a fifth had worked with symptoms for a day or more and 77 per cent had worked during the infectious period.

“It’s likely by the time the first case of infection among healthcare workers was diagnosed, there was already reasonable well-established person-to-person transmission within the hospital,” public health director Mark Veitch said.

“What we can’t rule out is that there may have been some missed early cases that contributed to early transmission in the hospital,” Dr Veitch added.

Tasmania’s chief medical officer Professor Tony Lawler said the reasons those staff felt they should keep working should be examined.

“People come to work when they feel they must, because they don’t want to let their patients down or let their colleagues down,” he said.

“Nothing in this report should be seen as taking away from the amazing efforts of staff in the north-west.”

Of the state’s 219 coronavirus cases, 146 have occurred in the northwest.

Tasmania’s first three fatalities were passengers from the Ruby Princess cruise ship, which allowed disembarkation in Sydney before coronavirus test results were returned.

The North West Regional Hospital and its private counterpart were shut on April 13 for deep cleaning. Some services have since resumed.

About 1200 healthcare workers, plus their families, were forced into two weeks of quarantine to mitigate the outbreak.

The lockdown expires on Sunday, but Burnie mayor Steve Kons wants it extended.

“I am on the path of a more cautious approach to these sorts of things,” Mr Kons told ABC News.

“I would rather have the situation overcome, and I will back the government in what they do – but caution over anything else is something.

“I would rather have the professional medical people out there in the forefront, talking about relaxing restrictions.”

Mr Kons said the report’s finding were expected and processes would be implemented to avoid a repeat.

Twenty-one of Australia’s virus deaths were passengers on the Ruby Princess, which allowed people to disembark in Sydney before test results were returned.