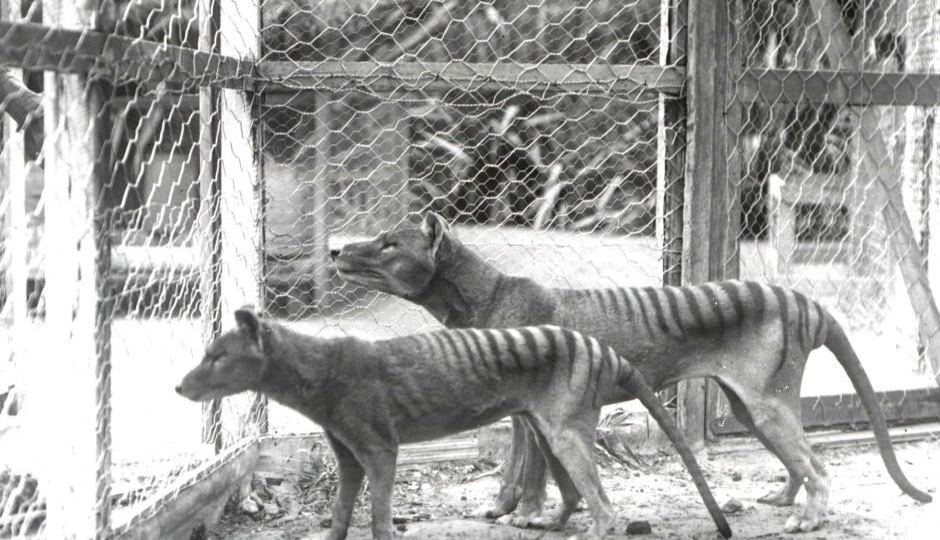 Researchers say the Tasmanian tiger would have shared a common ancestor with dogs and wolves. Photo: Tasmanian Museum and Art Gallery

It’s long been considered extinct, but that hasn’t stopped a spate of reported sightings of the Tasmanian tiger.

It’s been more than 80 years since the last known thylacine died in captivity, yet eight alleged sightings of the carnivorous marsupial have been recorded by the state’s environment department in three years to September.

Reports of the Tasmanian tiger, from tourists, farmers and cyclists, range from footprints to a black-striped animal and one walking with cubs.

Two visitors from Western Australia claim in February 2018 a thylacine walked in front of their car at Corinna in the state’s north-west.

“The animal had a stiff and firm tail, that was thick at the base,” their account, released this week in government documents, reads.

“It had stripes down its back. It was the size of a large kelpie (bigger than a fox, smaller than a German shepherd).

“The animal was calm and did not act scared at all.”

The couple said they were “100 per cent certain the animal [they] saw was a thylacine”.

“I’ve never come across an animal anything close to what I saw.”

“It didn’t really make sense to me as being a typical cat, location wise, behaviour and the way it walked,” the report reads.

“As I live in a rural area of Mudgee, I am accustomed to coming across most animals working on rural farms.

“But I have never come across an animal anything close to what I saw in Tasmania that day.”

“This sighting bothered me for a few minutes and I pushed it aside.

“It had a long body, this is one aspect that made it look unlike any other animal I have seen before.”

While the unconfirmed sightings might fuel the hopes of some, the thylacine is still widely considered extinct.

“While these are recorded, there is no evidence to confirm the thylacine still exists.”

“There’s nothing there that’s concrete,” he said of the newest reported sightings, adding it was “very unlikely” the animal is still out there.

“There’s a lot more chronic searching these days with cameras and wildlife traps for other animals.”

“It’s not impossible but it gets less and less likely as time goes by.”

The last captive tiger died on September 7, 1936, at the since-defunct Beaumaris Zoo.

Hunting, the introduction of dogs and the loss of habitat were to blame for its demise.

Stripes and tails in ‘sightings’ of Tasmanian tiger