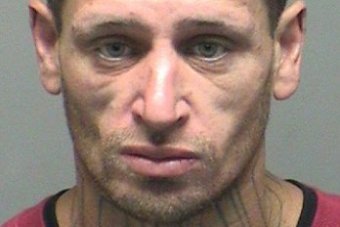 Police distributed a new headshot of Graham Enniss, saying it most closely resembles his current appearance.

An escaped prisoner who has been on the run from Hobart’s Risdon Prison since Monday has been found, police have confirmed.

It is understood he and another inmate escaped the prison using scaffolding that had been left behind.

The other inmate was quickly captured, but Enniss could not be found.

It is understood he was found shortly before midday in bushland after being spotted by a witness on the ground.

Police say Ennis is dehydrated and chilly but has not been injured.

Meanwhile, in Burnie 26-year-old Braydon Stanley escaped police custody by walking out the front door of the police station about 4:30pm yesterday.

He was seen an hour later in the Brooklyn area.

Police say Stanley has various tattoos on his neck and face and say he should not be approached.

“This has now been going on for 18 months, almost on a daily basis parts of the prison are locked down, it’s not sustainable,” he said.

“It comes from a government that wanted to be seen to be tough on law and order; they changed the law, they locked people up for longer, they put more people in prison for longer without investing in infrastructure.”

He said the union had concerns about the way inmates were being classified in an overcrowded system.

“The pressure in the prison system at the moment is very much at the maximum security and particularly at the management end,” he said.

“So we are concerned that inmates that have violent histories both outside … but also inside the prison, are very quickly being downgraded from maximum security to medium and eventually to minimum security.

“That unfortunately puts our members at risk, it puts the other inmates at risk and unfortunately today it’s putting the community at risk.”