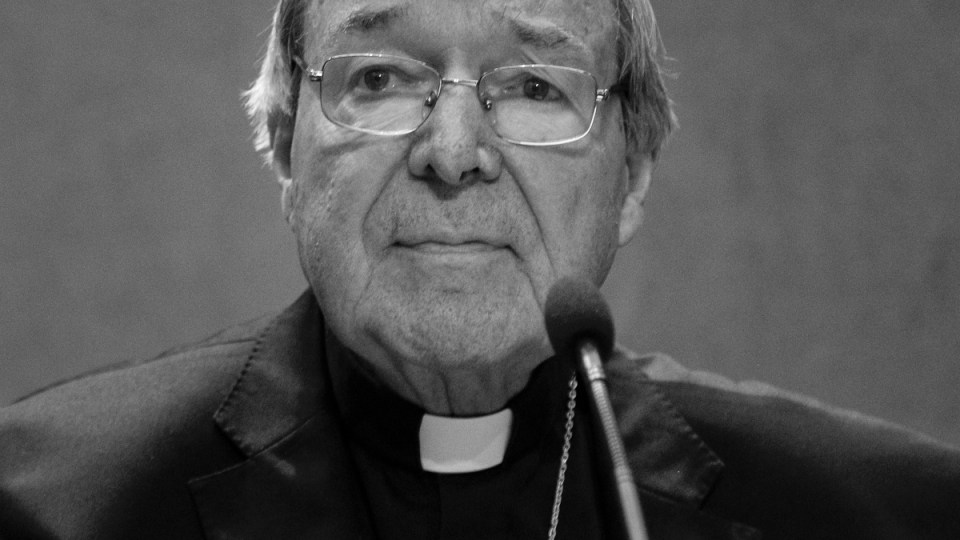 A Catholic paper printed and then pulped a defence of convicted paedophile George Pell. Photo: Getty

A Tasmanian academic who wrote an opinion piece defending Cardinal George Pell and describing his “accusers” as “wicked” has apologised for the article, which the Catholic Church has since pulled.

Pell has been convicted of sexually abusing two choirboys while he was the archbishop of Melbourne in the 1990s.

He is due to be sentenced on March 13 but has already lodged an appeal.

The director of Hobart’s Christopher Dawson Centre for Cultural Studies, David Daintree, wrote the article in this month’s edition of the Catholic Standard, which was to be distributed this weekend.

At least one church in Hobart had already received the publication before the opinion piece was pulled.

“I know Cardinal Pell well. I like him and respect him. I simply cannot believe that he is guilty, ” Dr Daintree wrote in the piece.

“Pell is a tough man and he will, by the grace of God, survive the wickedness of his accusers and the silence of many who should defend him but won’t.”

The Archdiocese of Hobart said a decision was taken to “immediately” withdraw the publication from distribution after concerns were raised about the op-ed.

In a written apology issued by the Archdiocese, Dr Daintree said he apologised “unreservedly” for any offence he may have caused.

“It was never my intention to cast doubt on survivors. I’d also like to make it very clear that the views were mine alone and in no way represented those of the Archdiocese of Hobart,” Dr Daintree said.

In an email, Dr Daintree provided an additional statement to the ABC, and said he was aware his article had caused “grave offence due to sharp criticism of Cardinal Pell’s ‘accusers'”.

“Please note that I did not use the term ‘victims’: the focus of my thinking was only on public figures and journalists who in the months and even years preceding the trial did all they could to besmirch the Cardinal’s reputation,” Dr Daintree said.

“In my view they contributed to the growth of a toxic and hostile environment in which justice would struggle to prevail.”

Anglican Church abuse survivor and Beyond Abuse founder Steve Fisher described the comments in the opinion piece as “disgraceful” and “disgusting.”

“Especially given that they are about Cardinal Pell and they come at a time when survivors are really hoping that the guilty verdict of Pell may change the way the Church treats survivors,” Mr Fisher said.

“The impact [of these comments] on survivors is just basically another kick in the stomach, it’s just again another way of putting survivors down.”

Mr Fisher said Dr Daintree should be sanctioned from writing for any Catholic publication.

Dr Daintree said he had also withdrawn the article from the Dawson Centre website and Facebook page.

The Archdiocese of Hobart said it strongly condemned all forms of child sexual abuse and was committed to working with victims and their families to address the great suffering they had experienced.

An amended version of the Catholic Standard will be published in the coming week.

‘Day of prayer’ for Pell cancelled

The newspaper withdrawal came the same day the Archdiocese of Melbourne cancelled an event urging parishioners to pray for Pell.

Flyers were issued for “A Day of Prayer for Cardinal George Pell” at the Nazareth House Chapel in Camberwell, to be held on Saturday.

However, the Catholic Archdiocese of Melbourne confirmed on Friday that the event had been cancelled.

“If we are too quick to judge we can end up joining the demonisers or the apologists, those baying for blood or those in denial,” Archbishop Fisher was quoted as saying.

“Our [Sunday] readings remind us that things are not always what they seem; that we must look beneath the surface and allow truth and justice to unfold in God’s good time.”