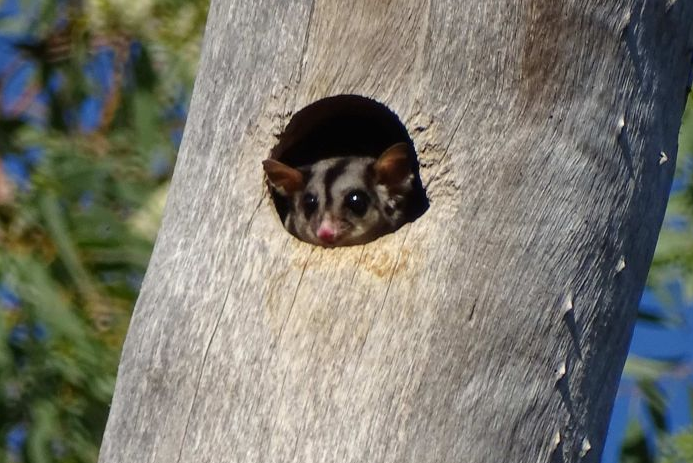 Cute but deadly if you're a swift parrot, this sugar glider could be marked for death itself. Photo: ABC/Mark Collom

A new plan by the Tasmanian government to protect nesting swift parrots from sugar gliders through a capture-and-cull method has been criticised by Animal Liberation Tasmania.

Found in parts of Tasmania, Victoria and New South Wales, the critically endangered swift parrot breeds only in Tasmania.

Sugar gliders, which were introduced to Tasmania from Victoria in the early 1800s, have been shown to have a devastating impact on the swift parrot’s breeding success.

Up to 79 per cent of nests and 65 per cent of breeding females on mainland Tasmania can fall victim to sugar gliders each year.

In order to combat the threat of the gliders, the state government has invested $150,000 to trial trapping sugar gliders in 80 nest boxes across Tasmania, creating safe zones for the parrots to breed.

The boxes will be placed in swift parrot breeding areas and monitored, and any sugar glider trapped will be culled.

“It’s one of those difficult situations, because the swift parrot needs all the help it can get … but at the same time it’s just this disappointing cycle of government bodies and agencies viewing conservation efforts as purely ‘kill kill kill’,” she said.

“We see it when it comes to rabbits with biological agents, such as poisoning or the caliciviruses.

“There’s no long-term strategic management plan to control breeding of invasive species after the initial cull has occurred.

“Same with deer, same with cats. There’s just this bloody single-minded view of ‘kill anything in sight’, but not actually think to the long term about how to manage breeding in the future.”

She said humans needed to look at how they were “contributing to the plight of the swift parrot” through logging and habitat destruction.

“We need to actually start looking a little bit more closely at ourselves as a species rather than blaming what we deem invasive species,” Ms Algar said.

Primary Industries Minister Sarah Courtney said the plan would support the swift parrot into the future.

“We know that sugar gliders are a key risk for the swift parrot, so the $150,000 investment will create safe zones to ensure that the swift parrot can breed and breed successfully,” she said.

“We know this critically endangered species is very important, so that’s why this investment has been made — to ensure that this risk from the sugar glider is minimised as much as possible.”

When questioned about logging, Ms Courtney said while there were a range of risks, the current plan was to address the issue of sugar gliders.

“We know that sugar gliders are an introduced species into Tasmania,” she said.

“Any caught sugar gliders will be euthanased humanely and responsibly.”

“While these early steps to address the sugar glider issue are welcome, addressing sugar gliders is going to be a very long, very arduous, very expensive and very time-consuming process,” he said.

“The single quickest thing the Hodgman Government can do is to protect habitat for the swift parrot, which is continuing to be lost at the hands of logging, land clearing and under dams.”

A government spokesperson said while the pilot program targeted sugar gliders, forestry operations in the state were carried out with consideration given to endangered native wildlife.

“Tasmania has a world-class forestry industry and the department works closely with The Forest Practices Authority to ensure appropriate management of threatened species,” they said.