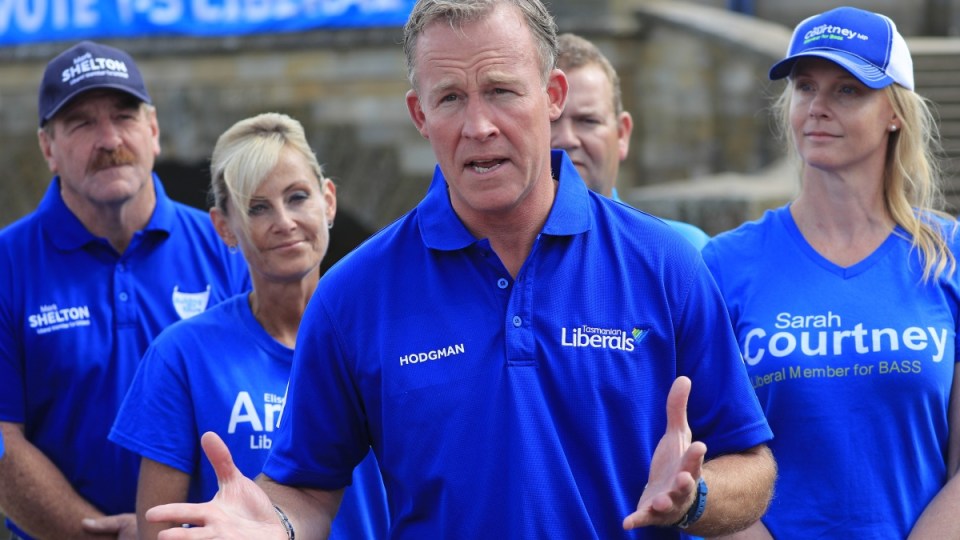 Premier Will Hodgman is set for a second term after a campaign that saw labor accuse him of "buying" seats. Photo: AAP

Tasmania’s Liberal Party has been returned to power, winning majority government in the state election.

Will Hodgman’s Liberals will be elected in at least 13 seats, which is enough for them to govern in majority for a second term.

Amid Liberal party chants of “four more years” and flanked by his wife Nicky and two of his children, Mr Hodgman said it was a great privilege to be Tasmania’s premier.

“Tasmania is a very different place now to what it was four years ago,” he said.

“Our state is more confident. It is prouder. It is stronger. And I believe our best days are ahead of us.

The Liberals’ victory was dampened by the loss of former attorney-general Vanessa Goodwin, a good friend of Mr Hodgman who died on election day.

“Today we lost one of our own, one of our finest and one our state’s finest,” Mr Hodgman said.

“And to the friends and family of Vanessa Goodwin, who has been the strongest support to me and part of the team that has got us to this point, I give you my thanks.

“And I thank you, Vanessa, for what you have done to help me and our party be the very best it can be.”

Labor leader Rebecca White conceded defeat in the Hobart tally room.
“I am so proud of the campaign we have run this election,” she said as she thanked the Labor party faithful.

“We are stronger. The Labor party is stronger because of the campaign we have run this election.

“We always knew we were up against it, and we have very nearly pushed a first-term government to defeat.

“Today the Tasmanian people have put this Liberal Government on notice.

“We have run a campaign of integrity. We have had swing statewide back to the Labor party this election.”

Ms White did not congratulate Mr Hodgman in her speech, and she accused the Liberals of buying seats with an expensive campaign.

“It should not be the case that you can buy a seat in the Tasmanian Parliament, that is shame,” she said.

“The Tasmanian people should be represented by the best representatives, not the richest.”

Ms White said she was looking forward to continuing in her role.

The incumbent Premier polled very strongly, and is only the second Liberal in Tasmania to win consecutive elections with a majority.

With about 75 per cent of the vote counted the Liberals have 13 seats, Labor eight and the Greens one.

Greens leader Cassy O’Connor could be leading a diminished party, with her two sitting colleagues on shaky ground.

In the Hobart tally room, Ms O’Connor claimed the Liberals had been bought by the gambling industry, as the state debated poker machines as a key election issue.

“Yep, it’s been a difficult campaign for us,” Ms O’Connor said.

“Millions of dollars pouring in from the gambling industry, from the Federal Group into Liberal coffers.”

Ms O’Connor said it was money that had come out of the pockets of some of Tasmania’s poorest people and had a message for Mr Hodgman’s Liberals.

“This shame of being bought by the gambling industry will live with you forever,” she said.

To Greens supporters, Ms O’Connor had a message: “We’ll be back”.

In Bass, the Greens’ Andrea Dawkins is in real danger of losing her seat.

She was elected on a countback when Kim Booth retired in 2015.