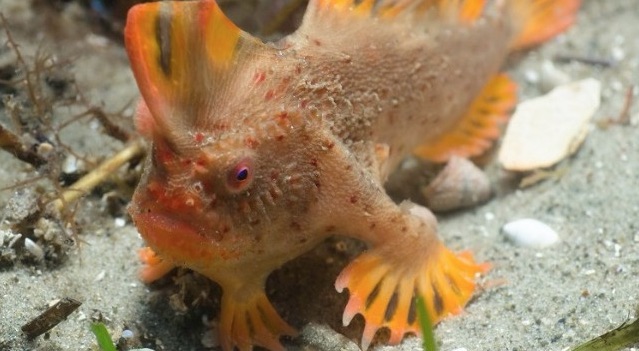 A new population of one of the world’s rarest fish has been discovered in south-east Tasmania.

The University of Tasmania’s Institute for Marine and Antarctic Studies (IMAS) announced on Wednesday it had found a new pool of Thymichthys politus, also known as Red Handfish.

Until last week only one known population of around 20-40 fish remained.

“Finding this second population is a huge relief as it effectively doubles how many we think are left on the planet,” IMAS scientist Dr Rick Stuart-Smith said.

“We’ve already learned a lot from finding this second population because their habitat isn’t identical to that of the first population, so we can take some heart from knowing Red Handfish are not as critically dependent on that particular set of local conditions.”

A team of IMAS divers made the discovery after public reports of sightings of individual handfish in the area.

The handfish gets its name from their unusual way of propelling themselves by walking on the sea floor rather than swimming.

The Red Handfish grows from about 6cm to 13.5cm long and has been observed eating small crustaceans and worms.

It was first discovered in the 1800s around Port Arthur.

IMAS Technical Officer Antonia Cooper was first to spot the fish thought to be on the brink of extinction.

“We were diving for approximately three and a half hours and at about the two hour mark we were all looking at each other thinking this is not looking promising,” Ms Cooper said.

“My dive partner went to tell the other divers that we were going to start heading in and I was half-heartedly flicking algae around when, lo and behold, I found a Red Handfish.

“Finding a new population that is definitely distinct from the existing one is very exciting.

“It means there’s potentially a bigger gene pool and also that there are potentially other populations out there that we’re yet to find, so it’s very exciting indeed.”

The new site remains undisclosed but is said to be a number of kilometres away from the previously known population in Frederick Henry Bay.

Dr Stuart-Smith said that Tasmania is a global hotspot for this family of rare and endangered species, including the Spotted Handfish and the Ziebell’s Handfish.

All three species are listed as critically endangered.