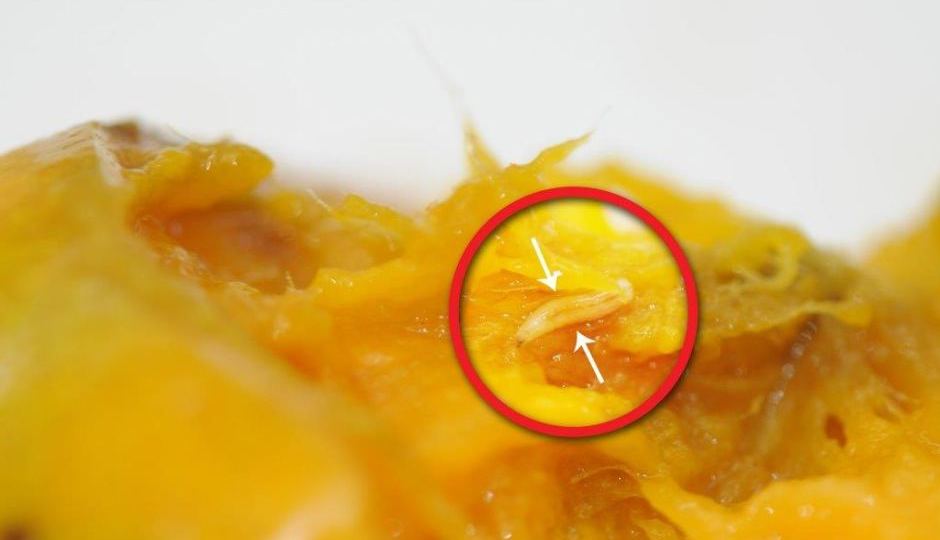 The larvae on apricots was reported by a member of the public at Spreyton. Photo: Biosecurity Tasmania

Suspected fruit fly larvae discovered on apricots in a backyard in Tasmania’s north-west are being investigated by biosecurity officers.

A control zone has been set up around the property near Spreyton after a member of public reported the larvae, believed to be a Queensland fruit fly species considered a list-A pest.

Department of Primary Industries, Parks, Water and Environment chief plant health manager Andrew Bishop says it is too early to say whether the cases are linked.

“At this stage, we are focusing on eradication of the pest from the infected sites (and) determining the extent of the incursion,” Mr Bishop said in a statement.

Tasmania relies on its fruit-fly-free status to export to premium markets in Japan, Korea, USA, Taiwan and China.

The larvae are being genetically tested to confirm its identity and trace its origin, while traps have been set up in a 1.5km radius around the property.

Spreyton is known for its apple growing.

The Queensland fruit fly is found along Australia’s eastern seaboard and in the Northern Territory.

It was declared a list-A pest in Tasmania in 1997.

Peter Dutton touted as next Liberal leader as he claimed victory in Dickson
‘The urgency of the situation’: WHO steps in as monkeypox cases erupt around the world
Volodymyr Zelensky: How war will end as Ukraine ‘breaks backbone’ of Russian army
Jim Chalmers decries Coalition waste as Labor hits the hustings amid downpours in Queensland
Anthony Albanese, Scott Morrison cast their votes in Sydney
Australian aces at French Open out to show there’s life after Ash Barty
New population of world’s rarest fish discovered
Today's Stories