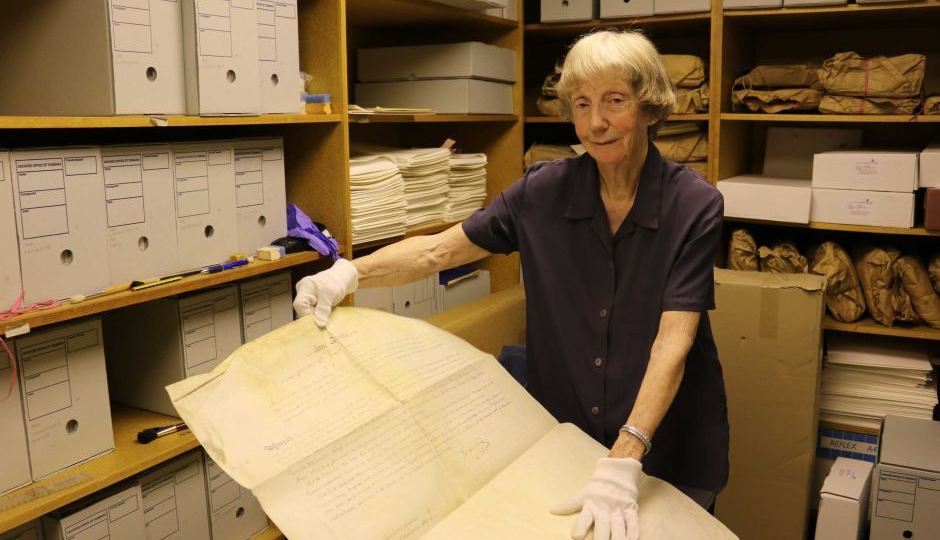 Dorothy Shea says she realised the documents were special when she saw them. Photo: ABC

Retired Supreme Court librarian Dorothy Shea is devoting her spare time to ensuring a cache of historic documents is preserved for future generations.

Mrs Shea stumbled across the documents two decades ago after noticing some brown paper parcels stacked in the court’s storeroom.

“I came searching for a piece of transcript,” she said.

“I didn’t find what I wanted but I did notice these brown paper parcels tied up with pink legal tape and wondered what they were.”

Inside the parcels were original copies of legislation dating back to 1833 when Tasmania was known as Van Diemen’s Land.

Many of the Acts are written on vellum, which is made from animal skin, and bear the signatures of lieutenant-governors including George Arthur and John Franklin.

Topics range from regulations around the sale of alcohol to prison regulation.

Mrs Shea has been the driving force behind a project to restore and archive the documents.

“I realised that they were special documents. They needed special treatment and I thought I’ll just keep mentioning [them] in the library committee and to the chief justices,” she said.

“I think gradually they thought, ‘Well, we better do something just to stop her keep talking about it’.”

Over the years, a small team of volunteers has helped contribute to the project but 76-year-old Mrs Shea took over when she retired in 2016.

Her work includes cleaning the Acts before putting them into storage boxes and recording them in a spreadsheet.

“I had to get special folders for the Acts because of the fragile nature of the wax seals,” she said.

The collection found in the storeroom included legislation from 1833 up until 1975.

“It is fascinating, the language and the subject matter,” Mrs Shea said.

“There seems to be a lot of concentration on public houses and selling liquor and spirits.”

There was some panic that a number of Acts had been lost.

“We thought we’d lost 13 Acts because the first Act for Queen Victoria that we had was number 14,” Mrs Shea said.

“It took us a while to realise that King William IV died on 20 June 1837 but no one in Van Diemen’s Land knew or could know until the next ship arrived and that would’ve been probably two, maybe three, months later.”

Supreme Court registrar Jim Connolly said the documents were important to the legal history of Tasmania.

“This legislation marks the evolution of what was originally a penal colony where it was military rule to the point where Van Diemen’s Land gained self-government status [and] changed its name to Tasmania,” he said.

Historical reason why Acts ended up in storeroom

Mr Connolly said there was a historical reason why the Acts had ended up in the Supreme Court storeroom.

In 1858, Tasmanian Parliament made a law requiring an original copy of all legislation passed to be kept among the records of the Supreme Court.

In 2013, the law was changed to transfer custody of all past and future Acts of Parliament to the Tasmanian Archive and Heritage Office (TAHO).

TAHO director of collections Ross Latham said he was looking forward to adding the historic documents to its collection.

“What would normally happen in a situation like this the government agency would actually come to the Archives Office and ask for our help,” he said.

Mr Latham said he was grateful for the hours Mrs Shea was putting in.

“All that physical care, the curation, the cleaning, the listing and the packaging is work that we’d normally do,” he said.

“We’re so appreciative of the fact they’ll come to us in a such a well-prepared way that things like digitisation will be able to happen sooner.”

The project has received funding from the Law Foundation and Archives Office but relies heavily on the volunteer work of Mrs Shea.

“I shudder to think what would happen without Dorothy, I think the project would grind to a halt,” Mr Connolly said.

Mrs Shea said she was hoping to have the project completed by the end of the year.

The Archives Office eventually plans to put the historic collection on display.

The fight to preserve nearly 200yo Van Diemen’s Land legislation