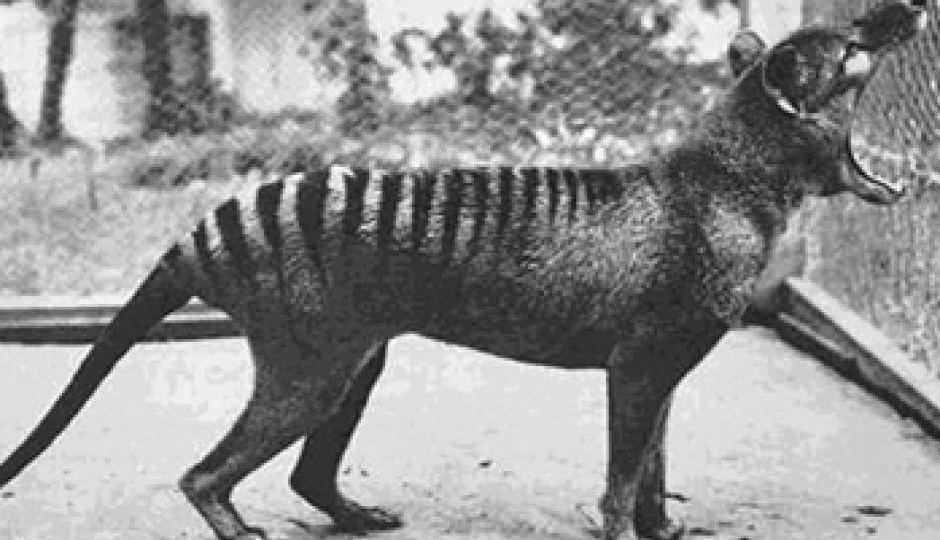 Benjamin, the last thylacine in captivity, died at a zoo in Hobart in 1936. Photo: Wikimedia Commons: David Fleay

Tasmanian tigers were in poor genetic health tens of thousands of years before humans came along and hunted them to extinction, a new DNA study of the iconic Australian marsupial shows.

The work also identified where the carnivore sits on its family tree and could help safeguard another beleaguered Apple Isle icon: the Tasmanian devil.

To read the genetic history of the Tasmanian tiger or thylacine (Thylacinus cynocephalus), biologists extracted and analysed DNA from a pup that’s been preserved for more than a century.

The genome, reported in Nature Ecology and Evolution on Tuesday, is one of the most complete sets of DNA of any extinct animal.

Piecing together an extinct species’ genome is no easy feat. DNA has a habit of falling apart, study co-author and University of Melbourne evolutionary biologist Andrew Pask said.

“[In the past], we’ve done a lot of work getting DNA from all sorts of [thylacine] specimens from all over the world, a lot of pelts, a lot of dried skin and bone, but it’s super-fragmented.

“It’s broken up into way too many pieces to think about getting a full genome sequenced.”

The preserved pup, on the other hand, was stored in ethanol, which didn’t degrade its DNA as much as other preserving fluids.

Even though it was more than a century old, the pup “actually has really good, much larger fragments of DNA than other specimens”, Dr Pask said.

The thylacine was a large carnivore that roamed mainland Australia as recently as 3000 years ago.

Analysis of the genome showed that even before humans arrived in Australia, there was very little genetic variation between individual thylacines.

Genetic diversity plays an important role in a species’ survival.

The more different types of genes in a population, the more likely some animals will make it through if their environment drastically changes.

In the case of the thylacine, mathematical modelling traced a genetic bottleneck back 70,000 to 120,000 years ago, which coincided with an ice age.

Rising seas cut Tasmania off from the mainland around 14,000 years ago, meaning the local thylacine population was always low in genetic diversity.

“They were actually in pretty bad genetic shape and it wasn’t because of their isolation on Tasmania. It was a longer-term decline in their history,” Dr Pask said.

Dr Pask said understanding the genetic basis of the thylacine’s extinction could help with efforts to conserve other species such as Tasmanian devils (Sarcophilus harrisii).

The diminutive carnivore’s population also has low genetic diversity which, like thylacines, is thought to have declined well before it was confined to Tasmania.

Their own branch on the family tree

University of Adelaide zoologist Kristofer Helgen said the study was the “first, deep glimpse into the entirety of the genetic make-up of thylacines”.

Even though thylacines sported a skull and snout that looks a lot like a dingo’s, they weren’t closely related at all.

The evolutionary branches of marsupials and the dog-like mammals known as canids diverged 160 million years ago, during the Jurassic period.

But just where the thylacine sat on the marsupial family tree has been contentious.

Some genetic studies claimed thylacines were closest to Dasyuridae, the family that includes Tasmanian devils; others suggested numbats were closer relatives.

The thylacine pup’s genetic blueprint suggested thylacines split off into the Thylacinidae family branch first, followed by numbats, and finally the Dasyuridae.

Any chance for resurrection?

The story of the thylacine is a tragic chapter in Australian conservation history.

The carnivores were deemed a threat to sheep farmers, so in 1888 the Tasmanian government placed a one-pound bounty for each thylacine head.

By 1910, thylacines were rare. Still, it took another 26 years for the species to be added to the protected wildlife list, by which time, it was too late.

Less than two months after laws passed to protect them from extinction, the last thylacine died at the Hobart Zoo.

“We certainly made them go extinct – there’s no question about that,” Dr Pask said.

“But we now know even if [thylacines] were still around today they’d probably be in the same genetic dire circumstances as the Tasmanian devil.”

So could we resurrect the species, a la Jurassic Park now we have the thylacine genome?

Well, not yet. That possibility is “still a long way off”, said Dr Pask.

Tasmanian tigers were in ‘bad genetic shape’ before extinction