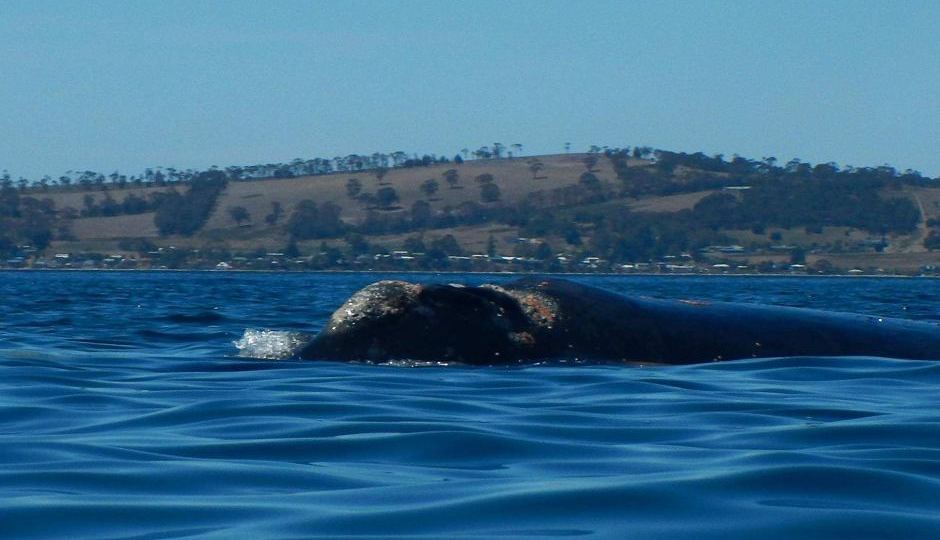 Sightseers swimming, kayaking and jet skiing close to a whale in Hobart’s River Derwent have been scolded for not observing safety precautions, with authorities warning a “tail flick” could result in injury or death.

The southern right whale, a threatened species, was spotted early on Wednesday in the river, with hundreds of people watching from the shore — but many took to watercraft for a closer look.

The Marine Conservation Program (MCP) urged people to observe “national guidelines” for those wishing to see the whale, which marine experts said was resting in the calm waters.

Michael Boon posted a video of his close encounter with the whale to the Whale Spotting Tasmania Facebook page.

“I’ve been hesitating about sharing these photos and videos because of all the anger in this group regarding the people in the water with the whale,” he said.

“But in the end I think I need to stick up for them. These swimmers did not approach within about 50m of this whale. They did not trap it, encircle it, harass it, or any of the other things you might be worried they did.”

Mr Boon admitted he was close enough to be in breach of the guidelines.

“Maybe we were lucky in this case, but this whale didn’t seem bothered. It swam to us and to the swimmers. On a couple of occasions it stopped by us and just lay there, presumably having a good look at us,” he wrote.

“Anyhow, the real reason I want to share this is because it was incredible, and I might have been the only person out there with a camera.

“If I got in the way of your view from the beach, I sincerely apologise, and I hope these photos and videos make it up to you.”

While Mr Boon was thanked by many for sharing his video some held reservations about people flouting the safety advice.

Bronwyn Scanlon asked: “So if everyone in Hobart who wanted to get close to a whale and take footage did, what would be the result?

“Guess we’ll see when the next whale arrives. A disaster. It must be managed. Nice pictures BTW bit still it remains an issue.”

Rick Kean said those who ventured close to the animal were “idiots”.

“At Kingston Beach they swam out and touched the whale. So many idiots in our society. Think they have a right to do whatever they want. I hope they are identified and shamed publicly.”

Mani Baker posted on the Whale Spotting Tasmania Facebook page: “If you’re one of the kayakers off Crayfish Point this evening 7pm-ish chasing the whale from 10 metres behind in a big group, I hope you read this: You should be bloody ashamed of yourselves!”

People reported swimmers were “touching” the whale, which authorities said appeared to be in healthy condition.

“This kind of disrespect of such an epic animal makes me really sad and frustrated, we’re so lucky to have a creature like this come and visit us at home, we should all be super stoked and also super careful,” Mr Baker said.

Many agreed, with photos posted of groups of spectators in close proximity to the large whale, which the MCP estimated could weigh “up to 70 tonnes”.

“The whale was so inquisitive that it didn’t mind it at all,” she said.

But experts have cautioned even an “accidental tail flick” from a whale could be fatal.

“Whilst we understand the excitement of spotting a whale close to shore, we remind water users to observe the approach distances outlined in the National Guidelines. Vessels should not approach closer than 100m to a whale,” MCP said.

“These approach guidelines are as much in place for public safety as maintaining welfare of these threatened species — an adult southern right whale may weigh up to 70 tonnes and even an accidental tail flick could cause serious injury or worse.”

Operators of drones and other aircraft also must observe prescribed safe distances from whales and dolphins, according to Australian guidelines.

Drones are “considered to be aircraft and this means that people operating drones near whales and dolphins must abide by the requirements of the EPBC Regulations that apply to aircraft or the relevant marine park, state or territory legislation,” the Department of Environment and Energy states in its 2017 advice.

“Aircraft, including drones, may disturb whales and dolphins due to their speed, noise, shadow, or downdraft in the case of helicopters.”

“This species is really commonly seen close to shore, and they are comfortable in shallow water down to about four metres or so,” Parks officer Kris Carlyon said.

“This species is currently heading south on its migration to its polar feeding grounds, so it will be resting up before a pretty big journey south.”

Whale sightings off the Tasmanian coast are now expected to taper off, with whales reappearing around May next year when they migrate north.