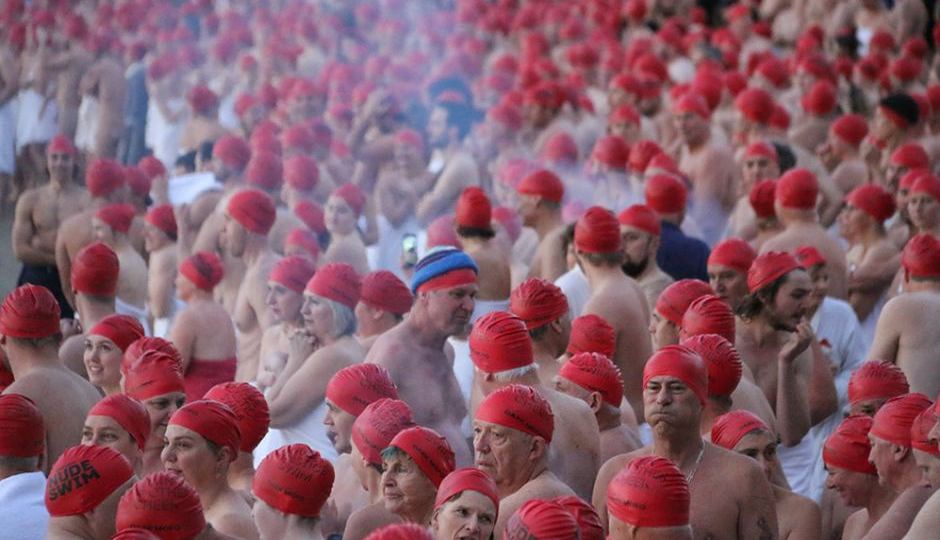 Dark Mofo organisers underestimated the number of towels they would need. Photo: ABC

A record number of people have jumped naked into the chilly waters of Hobart’s River Derwent for the annual Dark Mofo festival nude swim.

So popular was this year’s event, with 1020 brave souls lining up on Sandy Bay beach, organisers underestimated how many towels they would need.

But that did not curb the enthusiasm among the crowd marking the winter solstice.

The massive turnout may have been due to an unseasonally warm start to the Hobart winter, with daytime temperatures of up to 17 degrees Celsius.

But the reality on Wednesday morning was an air temperature of about 4C at 7:45am, with the water fortunately warmer, at around 14C.

In past years a lot of those who registered didn’t turn up on the day, but that wasn’t the case this year.

Watch the swimmers take to the water below:

Kirsha Kaechele, wife of Dark Mofo boss David Walsh, was one of those who missed out on a towel.

She made do by borrowing a used one from a friend.

“I just managed. Luckily I had a friend and he let me use his towel after he’d finished with it,” she said.

Ms Kaechele said it was very cold when she hit the water.

“But it’s so fun to share that with all of the other people who are just screaming – no one knows how far in they can go or if they’ll actually swim,” she said.

“We’ve had over a thousand swimmers out there – we thought we’d get a drop off because it’s a Wednesday and it’s cold,” she said.

Ms Gould blamed the towel shortage on the fact that the majority of people who registered actually turned up.

“Next year we’re going to double our towels; we’re thrilled with the response,” she said.

“We’re finding now that everybody who registers comes like clockwork, it’s becoming a yearly ritual for people.”

Ms Gould said it served as a “fantastic send-off” for the Dark Mofo festival.

“This is a wonderful way to cleanse after the longest night of the year, for everybody to dive in the Derwent, naked together and really wash off the last two weeks of Dark Mofo.”

The swim, which is more of a plunge and frenzied dash back out again, marks the end of the popular festival of art, music and the bizarre.

About one-third of the people who registered for the swim were from interstate, and many had been before.

But many were first-timers, including local man Gary Molloy.

“It was OK until I got up to my waist, and then it was just freezing,” he said.

“People were leaping in ahead, so I felt the pressure and had to dive in. I just went for the plunge.”

Janine Simson from Parkes in New South Wales said after the swim she felt numb from the waist down.

“It was fantastic but numbingly refreshing. We are popping the champagne now,” she said.