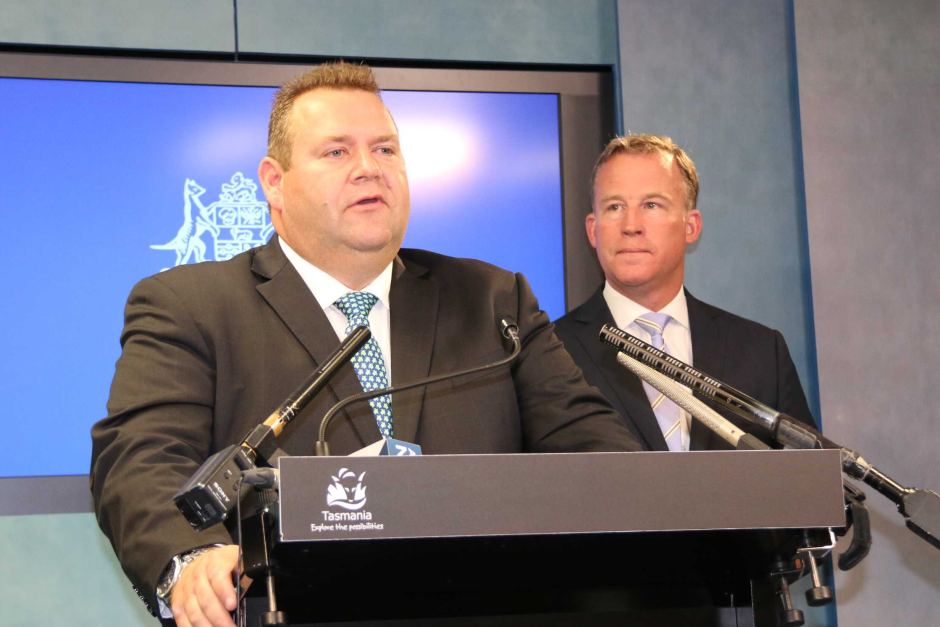 Mr Brooks was suspended from Cabinet last week after he misled a Budget Estimates Committee hearing.

He was forced to admit he was still using a company email account after repeatedly denying it.

• ALP, Libs taking risks, but returns not assured
• What’s in a name? Our political parties unveiled
• Sydney’s shocking storm damage from above

Mr Brooks was appointed Mining Minister in February on the proviso he sever all ties with his mining consultancy business.

The Opposition parties called for Mr Brooks to resign immediately, but Premier Will Hodgman instead announced on Friday a two-week audit by the Crown Solicitor of the emails to consider if there was a conflict of interest.

Mr Hodgman called a media conference late this afternoon in which Mr Brooks, a north-west based MP, was present.

Mr Brooks has been in the process of offloading his consulting company, Maintenance Systems Solutions, since taking over the portfolio, over concerns about a conflict of interest, given the company has been active in the mining industry.

The ABC understands Mr Brooks had used the email for correspondence with constituents.

Tasmania’s Labor leader has taken a swipe at the Premier, saying the resignation shows Mr Hodgman was incapable of showing leadership in not sacking Mr Brooks last week.

Opposition Leader Bryan Green said Mr Hodgman had failed to act in the past four days when it was clear to all Tasmanians Mr Brooks was caught red-handed.

Mr Green said with Parliament resuming tomorrow he believed the former mining minister saw no way out other than to resign.