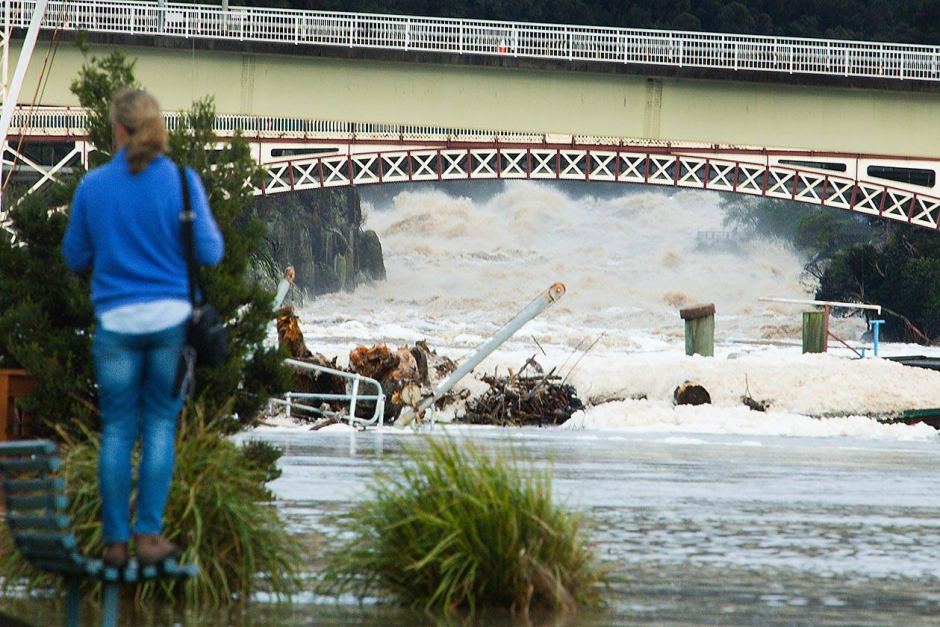 Water powers through Launceston from the Cataract Gorge. Photo: ABC.

Residents evacuated from a Launceston suburb threatened with major flooding have been allowed to return to their homes.

Levee banks are being credited with protecting the low-lying suburb of Invermay as river levels in Launceston were pushed higher by an incoming tide.

Floodgates have been in place since Tuesday night ready for the water which charged towards Launceston at an estimated 2500 cubic metres per second.

Elsewhere in the state, the search continues for two men swept away by floods in separate incidents on Monday and Tuesday.

A hat belonging to Ouse man Trevor Foster has been located and will be DNA tested.

Mr Foster was swept away on Monday and police said there was now little hope of finding him alive.

A van swept away on Tuesday near Evandale has been located but there is no sign of the occupant, a 63-year-old man.

The floods have so far claimed the life of a 75-year-old woman at Latrobe in the north-west.

Emergency services have used a helicopter to inspect the river and Invermay for potential damage.

While the high tide has inundated some businesses at Seaport, the State Emergency Service has warned the force of the water remains a danger.

SES acting head Nick Wilson said the high tide was continuing to be monitored, particularly around the Seaport area.

“It is causing some inundation and people should stay away from this area,” he said.

An evacuation centre at the University of Tasmania’s Newnham campus will remain open but the one at the Silverdome at Prospect has been closed.

The Charles Street bridge in Launceston will remain closed under the structure can be inspected at low tide.

Andrew Fullard from the Launceston Flood Authority described the flood as a one-in-50-year event.

Earlier on Wednesday, the South Esk River peaked at a lower level than expected, and levies also protected nearby Longford.

Damage to public infrastructure, including roads and bridges, is expected to cost millions of dollars to repair.

Tasmanian Premier Will Hodgman has toured flood-affected areas and thanked emergency services and volunteers for their efforts.

The government has offered immediate financial support to those affected.

“By no means are we through this, but there has been good news in so far as reports of weather conditions are concerned, but my message to Tasmanians is that they need to remain especially vigilant,” Mr Hodgman said.

Spirit of Tasmania services to resume

TasPorts expects Spirit of Tasmania services to resume within the coming days at Burnie if the Port of Devonport can not be used.

Submerged boats and other debris need to be removed from the Mersey River, before the Spirit and freight vessels can return to Devonport.

TT-Line has cancelled sailings from Devonport and Melbourne, but additional voyages have been scheduled on Sunday for affected passengers.

“We have assessed the infrastructure requirements in Burnie and believe that it is appropriate,” he said.

Authorities are urging people not to take their boats out on inland waterways due to the flooding.

Hydro Tasmania has warned some of its storages are overflowing and could suck watercraft into spillways.