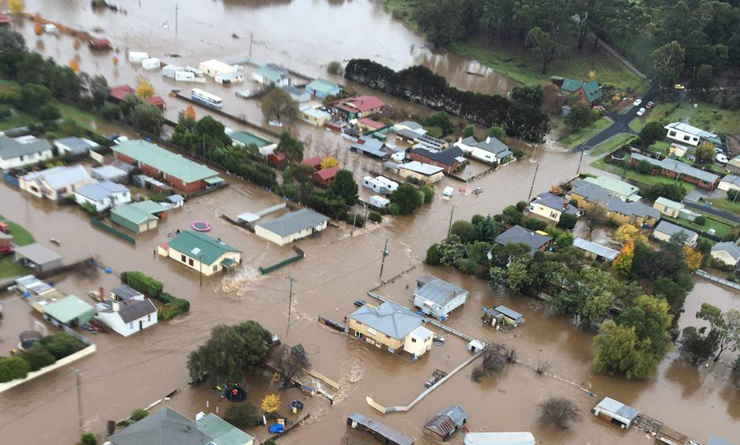 A view of the Tasmanian floods in 2016. Photo: ABC News

The body of a woman lost in the Tasmanian floods has been found in her home.

Mary Allford, 75, was reported missing after her husband was winched to safety when their Latrobe home was inundated with water on Monday.

On Tuesday police said search and rescue crews had found Ms Allford’s body after the water inside her home had subsided.

An 81-year-old man, named by the ABC as Trevor Foster, is still missing after being swept into the rising Ouse River from his backyard following heavy rainfall.

A second man is also missing in what Premier Will Hodgman says are the state’s worst floods for 40 years.

The man’s car was swept away in Evandale near Launceston. His female companion was plucked to safety from floodwaters on Tuesday morning.

“I want to reinforce that there should be no attempt by owners or members of the public to attempt to rescue those stranded animals,” SES acting director Nick Wilson told ABC TV on Tuesday.

“You’re simply putting yourself in danger – and certainly those lives of the responders.”

More than 100 people have now been rescued by helicopter across Tasmania.

Six men who sought shelter in their boat near Schouten Island overnight were rescued by a police boat.

Meanwhile, the state government says Tasmanians who’ve lost homes and belongings will be able to get immediate financial assistance.

Emergency aid of up to $750 per family – comprising $200 per adult and $100 per child – will be made available to help flood victims buy clothing, food, transport, shelter and personal items.

The Tasmanian government is also examining other support measurers and has officers on the ground supporting farmers with stock management.

Two other people remain missing in what Premier Will Hodgman says are the worst floods in the state for 40 years.

The SES says an evacuation of Invermay and Longford could be required as the South Esk River has broken its banks and should peak on Tuesday night or Wednesday morning.

Six surfers were rescued by police boat after they left the Coles Bay boat ramp on Monday to surf off Shouten Island.

Their boat was swamped and they sought shelter on the island until their rescue.

“These men were very lucky. These conditions there could have been a very different and tragic outcome,” he said on Tuesday.

The Insurance Council of Australia has declared the event a catastrophe.

There are least 200 homes and businesses inundated.

That includes 50 at Newstead, 35 at Latrobe, seven in Wynyard and five in Ouse.

Many others in outlying rural areas are also under water.

The Spirit of Tasmania ferry service between Melbourne and Devonport has been suspended because of the dangers posed by sunken vessels in the Mersey River.

Authorities are advising people to stay home and avoid driving in flood-affected areas.

More than 100 roads are closed but some road-closure signs have been swept away.