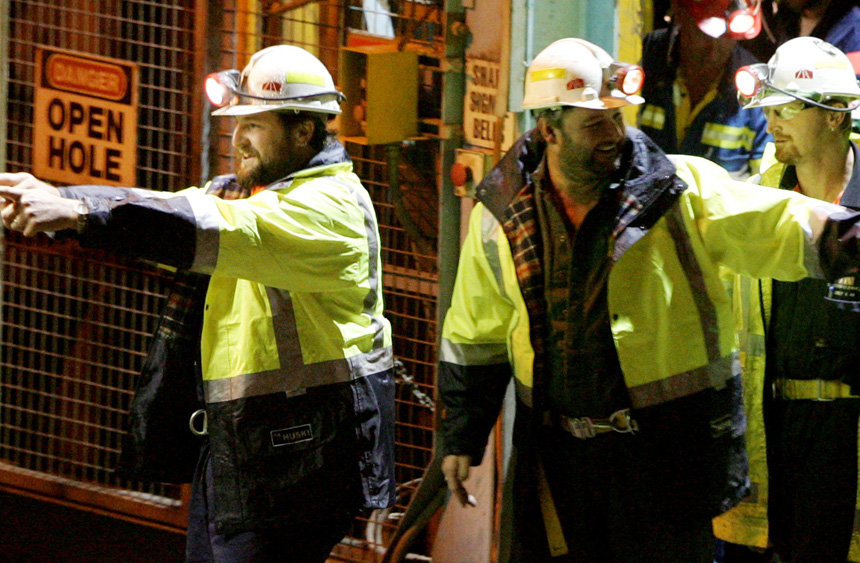 Two men who survived the Beaconsfield mine disaster 10 years ago have spoken of the mental scars that have remained long after the weeks trapped underground.

Todd Russell and Brant Webb spent a fortnight stuck in a tiny cage under the weight of 800 tonnes of rock and dirt after an earthquake triggered a massive rockfall at the northern Tasmanian mine in April 2006.

Their near-death plight and miraculous recovery captured headlines across the globe, but the pair experienced serious trauma long after their release.

“The person I became after being stuck underground was a monster,” Mr Russell told 60 Minutes.

Mr Russell tried in vain to internalise his trauma, but said bottling up his emotions almost cost him his marriage and his life.

He became withdrawn and angry, would snap at the kids for no good reason and couldn’t handle noises.

“I thought I was coping with it the way I should have been when I came home,” Mr Russell said.

“But I got a reality check by Carolyn and the three kids and I was met at the front door you know, with their bags packed, ready for them to move out.”

“I can tell you now, it doesn’t make you any less of a man or woman to go and seek help,” he said.

“If I hadn’t have gone, you know, who knows what direction I could have taken.”

Mr Webb also spoke of the mental anguish which lingered long after the pair’s escape.

“If you want to brush it aside, you know, start talking about it.

So, that’s what I did. I talked to everyone. It worked for me. I wish Todd would have done it earlier.”

But Mr Webb’s trauma resurfaced again recently, when a run-in with an employer sent him into a spiral of aggression, depression and panic attacks.

Mr Webb said he still holds onto anger over the death of his mate Larry Knight, a veteran miner killed in the goldmine collapse.

A coronial inquest found that neither the mining company nor any individuals were responsible for Mr Knight’s death.

However, Mr Webb claimed the mine’s managers were to blame for allegedly failing to heed warnings from geologists and seniors miners about major risks at the site.

“It’s beyond comprehension. You dig a hole, it’s going to fill in, every fool knows that, but apparently the people that did the inquiry don’t know that.”