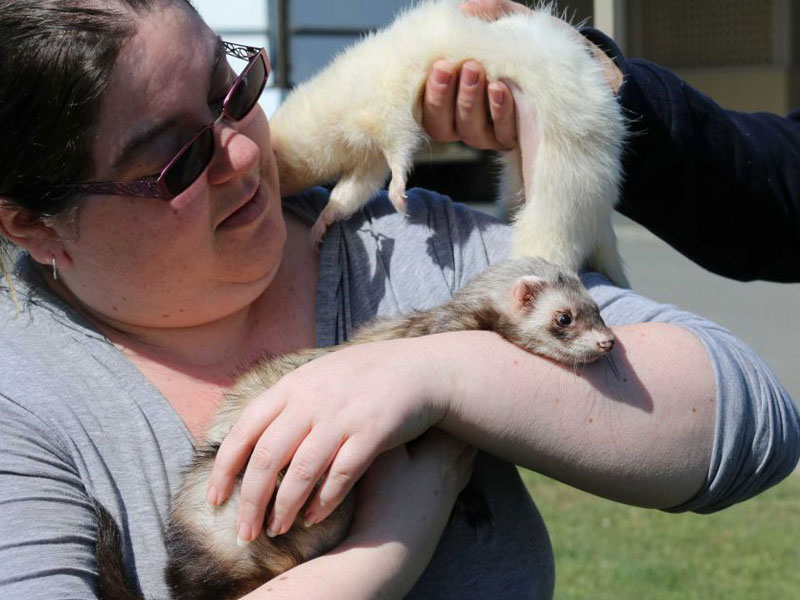 The growing popularity of ferrets as pets will be on display this week at the Royal Hobart Show.

The animal – closely related to otters, weasels and badgers – will be exhibited at the show for the first time.

“They make really wonderful pets, if you’ve got the energy to put into them.”

Chief executive of the Royal Agricultural Society Scott Gadd said one reason behind the decision to show ferrets was that they played an interesting role in agriculture in colonial days.

The animals were introduced in the 1880s to control rabbits.

“If you think back in the early days when tools and resources were limited, ferrets were used to clear rabbits and catch rabbits,” he said.

“They’d put them down burrows and put traps at the other end so the ferrets would drive the rabbits out and it made them a lot easier to catch.”

Mr Gadd said this year the ferrets would be on display but ferret races and other hands-on activities were planned for next year’s show.

“They’re pretty cute, as you can see. They’re probably not top of mind for people when they come to a show but hopefully we’ll change that,” he said.

Ms Wunsch rejected the stereotype of ferrets being aggressive.

“They are no more likely to be aggressive or bitey than a dog or a cat, which is to say some of them are,” she said.

Ferrets can be a bit on the nose

But Ms Wunsch said they could be a little smelly.

“They can puff like a skunk a little bit,” she said.

“It doesn’t hang around so much – it’s like a really, really offensive fart.”

They might be cute but the Environment Department in Tasmania has classified the ferret as an “extreme threat”.

It is a controlled animal that is allowed as a pet, but it is an offence to let them go.

There are no known wild populations but if they were established they would pose a threat to many threatened species through predation and competition, such as the New Holland mouse, eastern barred bandicoot, the Tasmanian devil, spotted-tailed quoll and the forty-spotted pardalote.

The risk has increased with the significant decline of the devil, and climate modelling suggests the Tasmanian climate is highly suitable for ferrets.