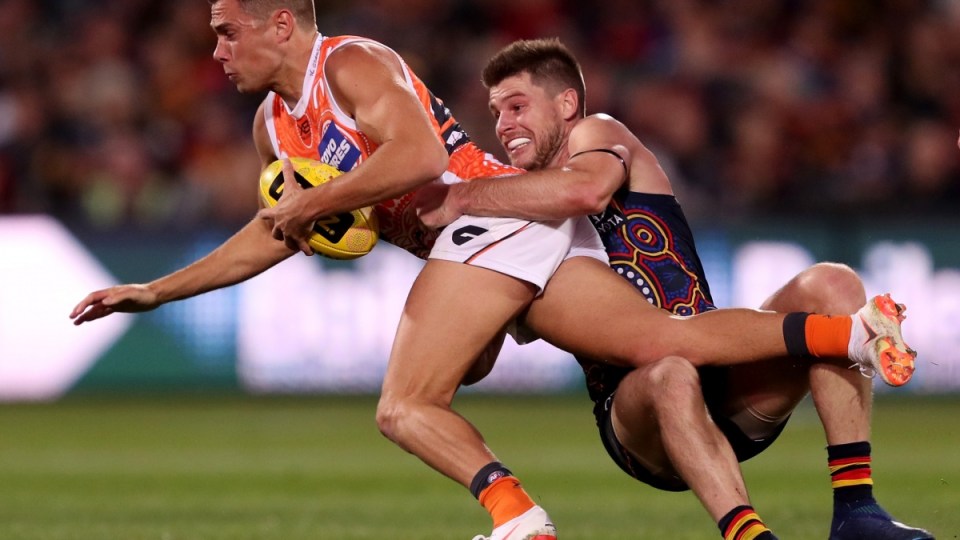 Bryce Gibbs lays a tackle on Josh Kelly in 2018, the year of the infamous camp and Adelaide's dramatic slide down the ladder. Photo: Getty

Former Adelaide Crows player Bryce Gibbs regrets not speaking up when teammates raised issues about a problematic 2018 AFL pre-season camp, saying in hindsight there were “plenty of red flags”.

Crows’ Indigenous superstar Edide Betts earlier this week revealed his culture was disrespected during the camp and sensitive information he disclosed to counsellors was yelled at him.

Gibbs, who switched from Carlton to Adelaide following the 2017 season, says the camp ended careers, fractured the playing group, and players were “educated” on what to tell family and friends.

“We were told not to go into detail about what happened and for whatever reason most of us stuck to that at the time,” he said on Saturday in a lengthy statement to SEN radio.

Gibbs said the group was blindfolded, put on a bus with the windows blacked out and blasted with heavy metal music.

He said he took a call from a counsellor about his childhood but didn’t disclose too much.

Gibbs said his experience wasn’t as bad as Betts or Josh Jenkins, who on Friday backed Betts’ claims, saying personal information he told camp leaders was also used against him.

“All these little things that kept happening that were strange and you didn’t think too much of,” Gibbs said.

“Reflecting back there were plenty of red flags that were happening as the camp went on.

Gibbs believes the camp contributed to the club’s slide in 2018 after they made the grand final the year prior.

“Probably the most disappointing thing … was the post-camp and the wash-up when we were reflecting on it,” he said.

“Guys started to speak up … those who had issues with what had happened, talking about their experiences.

“This is where I feel really disappointed in myself, this is when I started to take a back seat.

“Watching guys stand up and say ‘this is not on, we need to address this; we need to tell people what happened’, they seemed to get shut down pretty quickly.”

Gibbs, who retired at the end of 2019, said players lost trust with members of the football department after the camp. Betts has said he lost passion for the game afterwards and never found it again before retirement.

AFL chief Gillon McLachlan and Adelaide boss Tim Silvers have apologised to Betts, while the league’s players’ association has reopened an investigation.

A SafeWork SA probe last year cleared Adelaide of breaching health and safety laws and an AFL investigation in October 2018 fopund no case the Crows beached any industry rule.

“We tried to move on … that was obviously the wrong thing. That’s probably why we’re speaking about it four years on,” Gibbs said.

“Reflecting on it all, it just shouldn’t have happened.

“I feel like the decisions made to do some of these things ended careers. The backlash it’s had for guys mentally, you can’t erase that from your memory.

“I could’ve been a voice and supported these guys more in a group environment in challenging some of the decisions that were made during this time.

“If I had my time again, I would do things differently.”