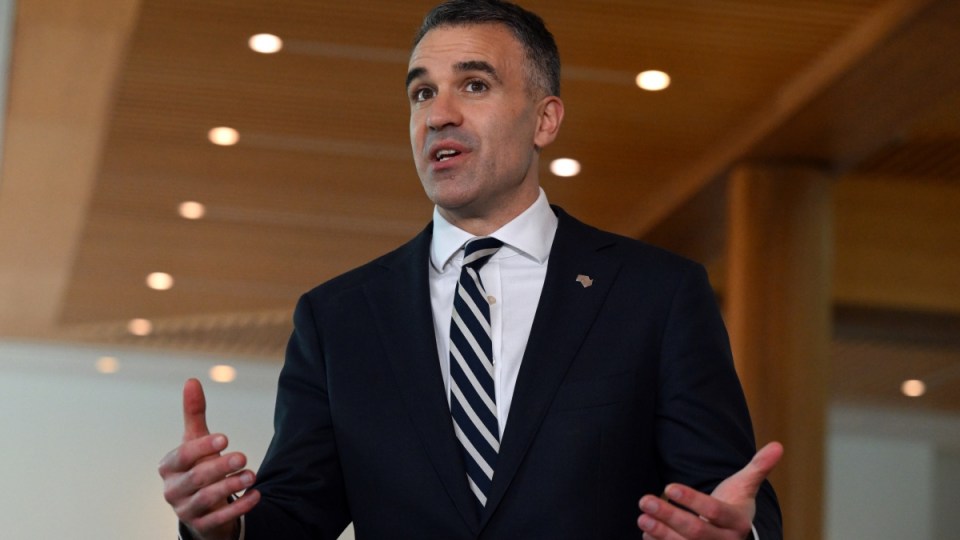 SA Premier Peter Malinauskas says he's proud of what his state has done to act against the Russian invasion. Photo: AAP

South Australian Premier Peter Malinauskas has taken aim at the Russian president after being named on a list of of Australians subject to sanctions.

More than 120 Australians, including journalists, businesspeople and defence officials were added to Russia’s list of sanctioned individuals late on Thursday, accused of promoting a “Russophobic agenda”.

Mr Malinauskas was the only state leader – and said he was proud to be there.

“I am very grateful for the fact that Vladimir Putin has paid attention to the leading role that South Australia is playing for standing up for the democratic values that we collectively as a country hold dear,” he said in Canberra on Friday.

“My government has sought to do a number of things to send a very clear message that the people of South Australia stand firmly with Ukraine, as does every state and territory – and I am just grateful for the fact that Vladimir Putin took notice.

“Malinauskas is a Lithuanian name [and] my family knows all too well the human tragedy that can occur in the face of unacceptable Russian aggression, and I am very proud of the fact that my government has played a leadership role and look forward to doing that in the future.”

Earlier, in a tweet, Mr Malinauskas said he would not be bullied by Mr Putin.

“While travelling to Russia wasn’t on my bucket list, it appears this decision has been made in response to my government’s strong stance in standing up for Ukraine,” he said.

Action taken by SA in response to the war in Ukraine has included removing state government investments in Russian assets, sending medical equipment to the region and resettling Ukrainian refugees.

Those mentioned on the list are barred from entering Russia indefinitely, the foreign ministry said.

It added that it could expand the blacklist as the Australian government “does not seem inclined to abandon its anti-Russia policy line and continues to produce new sanctions”.

Meanwhile, Prime Minister Anthony Albanese has confirmed a trip to Spain for a NATO meeting next month. But he remained non-committal about whether he would take up an invitation to visit Kyiv.

Mr Albanese has been invited to visit the Ukrainian capital by President Volodymyr Zelensky, who gave his ambassador to Australia a hand-signed letter to hand to the PM.

“I will take appropriate advice and obviously there are security issues as well in terms of such a visit,” Mr Albanese said on Friday.

“I appreciate the spirit in which it has been offered.”

He reaffirmed his support for Ukraine, with the defence of the eastern European nation to feature heavily during NATO talks.

“One of the reasons why Australia has been invited to NATO is that Australia is the largest non-NATO contributor to give support to Ukraine in its defence of its national sovereignty against Russia’s illegal, immoral invasion,” he said.

“We will continue to stand with the people of Ukraine.”

Russia describes the incursion of its forces into Ukraine as a “special military operation” to disarm and “denazify” its neighbour.

Ukraine and its allies have rejected this as nonsense.

Australia in May sanctioned more than 70 Russian politicians and more than 30 local officials in the eastern Ukrainian separatist regions of Donetsk and Luhansk.

‘Won’t be bullied’: Premier hits back at Russian sanctions