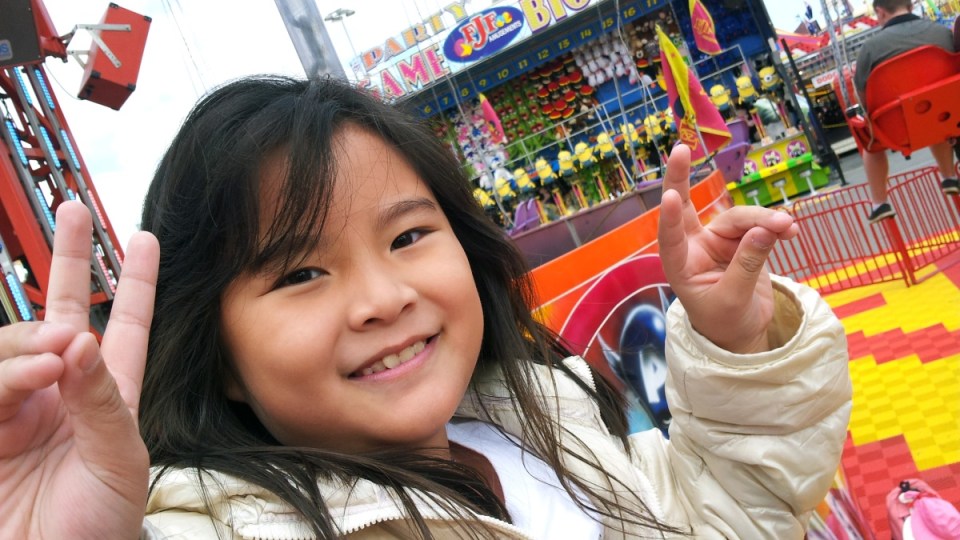 Adelene Leong had been visiting the Royal Adelaide Show while on holiday from Malaysia. Photo: Supplied

An eight-year-old girl was flung to her death at the Royal Adelaide Show after debt-stricken ride operators ignored safety instructions, a coroner has found.

Eight-year-old Adelene Leong had been visiting the show with her mother while on holiday from Malaysia in 2014.

While on the Airmaxx 360, she slipped out of restraints and was flung into the air before landing on the ground headfirst in front of her mother and multiple witnesses.

She died from multiple injuries.

Ride first of its kind imported into Australia

An inquest into Adelene’s death heard the Airmaxx 360 was the first of its kind to be imported into Australia in 2013 but did not undergo a required design registration process, using instead the certification for a similar ride.

The ride was bought by experienced amusement industry operators Jenny-Lee Sullivan and her husband Clinton Watkins, who borrowed more than a million dollars for the purchase and soon found themselves under financial stress.

They imposed a minimum height requirement of 120cm for unaccompanied riders despite the Spanish manufacturer recommending 140cm.

Adelene was 137cm tall at the time of her death.

Deputy State Coroner Ian White on Wednesday found Adelene’s death could have been prevented had the operators, having breached the terms of their loan multiple times, not ignored the manufacturer’s height requirement.

“I am satisfied that the owners deliberately concealed this information from all the relevant authorities for the purpose of expanding the eligibility of patrons to ride on the Airmaxx,” he said.

“I find this was done for commercial and financial reasons which were prioritised well ahead of this fundamental and crucial safety issue.”

The inquest heard the Airmaxx was operating at maximum force and a speed of at least 100km/h when Adelene was flung out.

She had been hanging from her seat upside down by her left ankle just prior to being ejected.

Inspection of ride at show inadequate

Mr Watkins had largely assembled the ride himself, seeking clarification on certain aspects in emails to the manufacturer.

An inspection of the ride conducted at the show was inadequate and staff were not properly trained, the coroner found.

“Adelene’s death that day was inexcusable,” he said.

“It could and should have been prevented.”

Adelene’s mother spoke of her devastation in comments relayed by her lawyer.

“(It) has made my life almost unliveable so that I have to live in a parallel world where I believe this did not happen,” she said.

Two weeks after Adelene died, Ms Sullivan applied for the Airmaxx to operate at the Royal Sydney Show, still outlining a minimum height of 120cm.

In an application that was later withdrawn, she referred to an incident at the Adelaide show but claimed “there has been no fault on the ride or operators’ behalf”.

The Director of Public Prosecutions in 2016 opted not to pursue criminal charges regarding Adelene’s death.

Ms Sullivan and her company were convicted in 2017 of breaching workplace health and safety laws but were found to be unable to pay any financial penalties.

The coroner recommended urgent reforms of amusement rides in Australia, including the implementation of a nationwide regulatory process, a database of design registration numbers and better vetting of ride inspectors.

“There needs to be a meaningful response to honour Adelene’s short life,” Mr White said.

“Her death must be a cause for fundamental change in the operation and governance of high energy rides in Australia.”